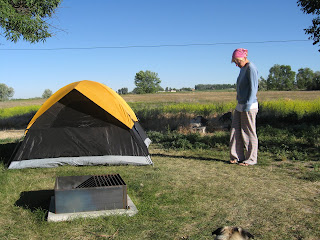 I woke up this morning first at 7:30 and then at 8:30. At 8:30 I shuffled to the kitchen. Made coffee. Made toast. Sat on the couch and opened this page. Two and half hours later I’ve accomplished nothing. Nothing. I blame MySpace, Facebook and random news stories about Broncos players diagnosed with diabetes, Britney’s preggo sister, a story about an Asian man whose skin turned to tree bark and another story about an Asian man whose face developed gargantuan tumors spilling out from under his chin like tsunamis of yellow flesh. Freakish stuff. This is what I chose to do with my precious three hours before Joe wakes up.

(He’s still sleeping by the way.)

Maybe if I go out on the porch in the sunshine.

Anyway. When I was in Gaitlinburg, Tenn. last summer I set up camp beside a 20-something couple from Baton Rouge. Their names were Rachel and Shawn. Newly engaged. I remember several key things about Rachel and Shawn. Namely that their tent leaked in a rainstorm that night and Rachel, totally pissed about this, stormed Shawn’s truck like an army sergeant first thing in the morning, hauling armfuls of wet clothes into the cab, cursing in a southern tongue that their “god damned Wal-Mart tent was a piece of goddamned shit.” I also remember that Shawn surveyed my car one night between bites of Smores and said, “That’s a Honda HX yer drivin there.” And I nodded and said yes. And he said, “Funny. I never seen an HX before.” And that was that.

I think about it often. Probably every day since that night in Tennessee. Whenever I’m driving and I pass another Civic, I check out the rear model name – LX. EX. CX. DX. Never HX. I drove from Sarasota, Fla. to Coos Bay, Oregon and not once did I spot an HX on the road, in a parking lot, at a traffic light. I was floored by this, so floored that I made a habit of announcing the make and model of every Civic I passed from there on.

It is a lame road trip game, but one of many Rain Man-ian ticks I developed while driving and camping alone, spanning our country’s most lunar surfaces – specifically northern Utah – doing maniacal things like rolling my tongue into a Tootsie Roll on the roof of my mouth, making noises I thought only my dog could hear and of course looking for Honda Civic HXs and never once finding one.

… Until yesterday on Siesta Key Beach, under the North Bridge facing the Ringling Causeway at 4 p.m. I obliviously parked next to one. A red HX. My car’s hamster-like twin, dustier and littered with fishing tackle. Its owner, a Mexican kid in a Hanes undershirt, knee-deep in salt water, was futzing with a bucket of oily jacks flopping to and fro. And since I was in the middle of photographing someone for the paper, I stupidly forgot to snap a photo of the car.

It started four years ago with a dog in the passenger seat of a truck. I was sitting in traffic at McKinley Parkway and Southwestern Boulevard in Hamburg, New York, staring at the truck parked next to me. Riding shotgun was a dog mangy from age, with a beaky face and once-crazy eyes. I remember sitting at the intersection we all called Seven Corners and looking over at Mangy Dog and thinking, shit Mangy Dog, I’ll never see you again. This moment I’m sharing with you now at the Seven Corners in Hamburg, New York in one minute will be over and I’ll never see you again.

At that time I had only a month to go before leaving New York for Florida. I was in that mode we all slip into before leaving a place for whoknowshowlong. It’s a state of mind I describe as Steely Sadness. Before leaving a place you grow balls of steel. “I can do this. I’m cool. I’m free spirited dust in the wind. I’m the stuff you write home about. Eck. Ugh. Sigh.” Which is such a farce, because really what happens is this:

You spot a mangy dog riding shotgun one day at an intersection famous for its deadly crashes and you start crying in spastic waves because you know this is It. You’re looking into the once-crazy eyes of a beady-beaked dog and you’re saying goodbye, out loud and in between snot-sucking sobs, you think: ‘I’m 23 years old and this is the most pitiful moment I’m ever going to have. (Which we all know is not true.) And if I weren’t at the wheel of this rattletrap jitney, at the deadliest intersection in Western New York, I’d be brought to my knees.’ But you’re wailing now like a breeched newborn slapped on the ass. And the dog is cocking its head and not blinking. And in his once-crazy eyes you see a shimmer of recognition (because glassy eyes make ghostly mirrors) and you know that in .3 seconds the light will go green, you’ll grit your teeth and say buh-bye.

Thus you are born into what I call steely sadness.

Light turns green. Dog looks away. You press your foot to the pedal and accelerate. With the window down you hear the sound of your car’s engine – not smooth, not steady, but high-pitched and throaty – and you shrug, because nonetheless you are moving.

I’ve not had another mangy dog moment. And like finding the HX yesterday (or as Joe calls it, “lampooning my white whale”) I have no idea what it will mean if it happens again. I like to reckon it’s one more kill in an existential scavenger hunt, though I fear it’s just one more asinine thing I do to distract myself.

Ps. The picture above was taken in Jerome, Idaho. If anyone ever calls Idaho ‘West-bum or East-bum’ anything please dismiss it. Idaho is beautiful and solitary. Idaho sunsets cast the best pink-ish light I’ve ever seen blanket a field at dusk.