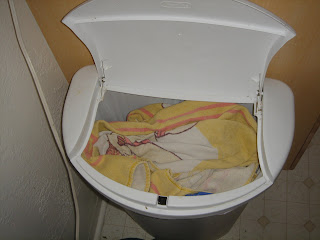 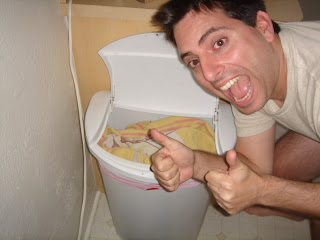 This was Joe’s Florida State beach towel that he had for 10 years.
To call this towel a beach towel would be like calling Jonah Hill Chris Farley.
No longer used for drying up after a shower, I think Joe used Towelie to slough off dead skin cells. (The fabric was the consistency of 80-grit sandpaper and couldn’t dry an elephant’s trunk.)

I know for a fact he used two towels after a shower – a fluffy, downy human towel and this – a feudal servant’s wash rag, tossed on the bedroom floor like a swath of cotton Eczema scabbing over anything it landed on.

A few weeks ago I nagged him like an old bitty in hair curlers and Isotoner slippers: “Can you at least hang Towelie on the hook behind the door?” I squawked from the bedroom.

(No way would this come back to bite me. No way would Joe use this as leverage … to say throw out the quickly-accumulating-dog-haired koosh balls I keep in the living room.)

I shook my head no. Not on my clock. If you want to throw the towel out do it on your own time, I said.

“Don’t be ridiculous,” he snapped, popping open the garbage can. “Toss it.”

As if carrying a ticking bomb held together by Hitler’s comb-over, I pinched the the end of the towel and carried it to the garbage, placing it gently on top of a heap of coffee grounds and dried pasta. To cushion any repercussions I grabbed Joe’s camera and insisted he pose for this picture next to the garbage as evidence.

So far it’s worked. No woe-is-me towel postmortems. No after-shower bellyaching. I’m in the clear. For now.

Up next: why I think the TV show “Lost” is “The War of the Worlds” revisited. How viewers got snared and duped into watching an ABC soap opera with more B.S.ing and sudsy tomfoolery than an episode of General Hospital.