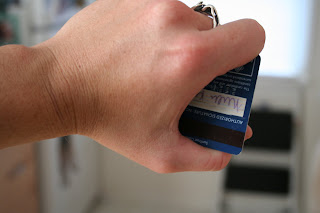 I lost my debit card last week on St. Pete Beach at about 2 a.m. Saturday. Assuming the card was gone forever and if found would result in $500 in Big Gulp and Marlboro purchases at 7-Eleven, I canceled it the next morning. However, when on Monday morning I got to work in Sarasota and the receptionist said to me, “Some guy sent me an e-mail. Said he found your debit card on St. Pete Beach,” I was like, Wah? The guy’s name is Mark Prue and he runs one of those metal detectors up and down the beach on weekends. When he found my card Saturday morning he Googled my name and figured out who I worked for. He contacted me via e-mail and I got the card in the mail the next day. 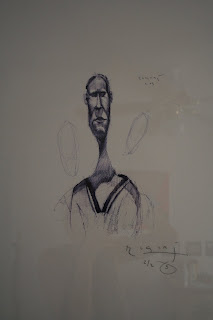 An artist in Sarasota named Tim Jaeger gave me this sketch in 2005. A couple years later Tim opened his own studio/restaurant in Sarasota called Canvas Cafe. The fact that he offers drag queen bingo on the front porch of this place draws almost as much attention these days as his artwork. 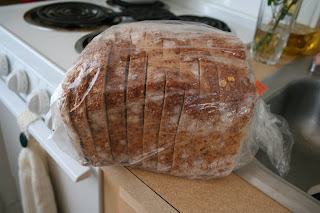 This loaf of bread came from a place in Tampa called Pane Rustica, where Joe and I sat for a good hour and half playing Uno last weekend with friends. The owner of the place came up to us just before we left, set a giant loaf of bread (priced at $18) on the table and proclaimed that it had been “his dream” since he opened his bakery, that people would come in to hang out and play cards. “The bread,” he beamed, “is on the house.” 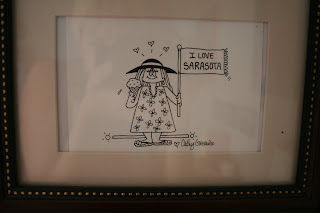 Cathy Guisewite drew this for me in March to go with a Q&A I did with her for the paper. We were on a tight deadline so she FedEx’ed it next-day delivery from Studio City, California to Sarasota, Florida. It’s now framed in my bedroom. I love it. 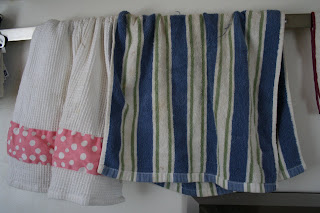 The dish towel on the right (the blue striped one) came from Philadelphia. I helped move my old roommate Zac up there in September and I’m not so much impressed with the towel, given to me by a girl named Marcie in Philly whom we stayed with when we arrived and who without my knowing used the towel to wrap around a jar of spaghetti sauce I purchased at Di Bruno Bros. so it wouldn’t break in my suitcase, but that Marcie let us stay with her unannounced for three days, and that she let Zac whom she had only met once unpack a Uhaul’s worth of stuff into her living room and then one week later moved said stuff up three flights of stairs into Zac’s new apartment three blocks away. I think about that every time I use this towel. Her goodness.