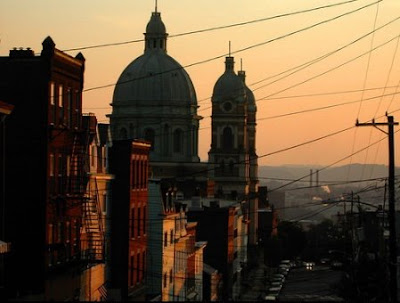 What is it about Buffalo? It’s a ghostly city lined with crumbling steel mills, surrounded by brick buildings with their windows punched out. The outskirts of the city, a town called Lackawanna, looks like the bottoms of a pair of muddy worn out jeans. The inside of the city on cold winter days from the top of the Skyway bridge is a kind of Gotham City snow globe. When you move away from Buffalo and tell people where you’re from they shiver and say, “Sure glad you got outta there, aint ya?”
That’s the thing about Buffalo. Most of the people I talk to who grew up there and no longer live there rarely speak ill of the place. (We save that for the people who remain.)
Tim Russert is a good example, rest his pundit soul. Ani DiFranco is another good example. Even Johnny Rzeznik from the blasted Goo Goo Dolls gets misty-eyed when he talks about Buffalo …
Rather than listen to me go on and on about why I love Buffalo, its pierogies and chicken wings, its dark old soul and puffy winter coat’ed people, I’m going to, in honor of Russert, post bits of what other people have said about the place. Here goes:
+
“It’s a really beautiful old place. It felt really good to be back where I grew up. It’s sort of that whole getting-back-to-your-roots thing only that sounds cliche, but there’s definitely a different kind of dramatic tension there than in L.A. … It just reminded me that this is who you are. This is where you’re from. It’s never anything to be ashamed of, and it actually gave me strength to have a sense of my own history. It’s so easy to come out to L.A. as an outsider and plant your head so far up your own ass you can disappear.”
– Johnny Rzeznik on returning to Buffalo after the success of his 1998 album, Dizzy Up the Girl. The band recorded its next album in a 100-year-old Masonic ballroom in the city.
+
“Like a typical Buffalonian I came back. There’s a high recidivism rate in this town. You can check out any time you like but you can never leave, so I’m back living two blocks from the hospital I was born in. It’s the community I desired all along, all those lonely folk singer-in-a -car days. It’s finally being realized.”
– Singer Ani DiFranco in an NPR interview on her decision to purchase a 137-year-old church in Buffalo and turn it into a concert hall.
+
“A few weeks before Dad’s 75th birthday, I called him and announced, “I’m finally in a position to buy you a new car.” For his whole life, Big Russ bought only used cars, and when I was a boy, I used to say, “Dad, someday I’m going to buy you a brand-new Cadillac.”
I sent him Cadillac, Mercedes and Lexus catalogs. “Look them over,” I told him. “You can have any car you want, with any options. It’s a birthday present. When I come for Thanksgiving, we’ll pick it up.”
On Thanksgiving, visiting Dad in Buffalo, I said, “Okay, which one?”
“Let’s go for a ride,” he said. We got into his Chevy Caprice and drove to Jack Adkins Ford. A tall, thin man with a Buffalo Bills jacket came out to greet us.
“This is Charlie,” Dad said. We shook hands. “He gave me a good number on my trade-in. Charlie, show him the car.”
“We followed Charlie into the showroom. There, all shined up, was a black Crown Victoria. I couldn’t believe it. “Dad, it’s a cop car!”
“Isn’t she beautiful?” he said. He opened the trunk. “You can get three suitcases in there, and two cases of beer.”
As we were heading home, I said, “Dad you could have had whatever you wanted – a Cadillac, a Mercedes, a Lexus – but you chose a Crown Vic. Do you really think it’s better?”
“No of course not,” he replied. “But if I came home with a fancy Cadillac, do you know what people would say? ‘His kid made it, and now he’s too big for us.’ This is who I am.”
– Tim Russert, from “Big Russ & Me.”
+
“There’s a part of the country could drop off tomorrow in an earthquake. Yeah it’s out there on the cutting edge, the people move, the sidewalks shake. And there’s another part of the country with a land that gently creaks and thuds, where the heavy snows make faucets leak in bathrooms with free-standing tubs. They’re in houses that are haunted, with the kids who lie awake and think about all the generations past who used to use the dripping sink.
And sometimes one place wants to slip into the other just to see, what it’s like to trade its demons for the restless ghost of Mrs. Ogilvey. She used to pick the mint from her front yard to dress the Sunday pork. Sometimes Southern California wants to be Western New York.
It wants to have a family business in sheet metal or power tools. It wants to have a diner where the coffee tastes like diesel fuel. And it wants to find the glory of a town they say has hit the skids, and it wants to have a snow day that will turn its parents into kids. And it’s embarrassed, but it’s lusting after a SUNY student with mousy brown hair who is taking out the compost, making coffee in long underwear.
– Folk singer Dar Williams, from “Southern California Wants to Be Western New York.”