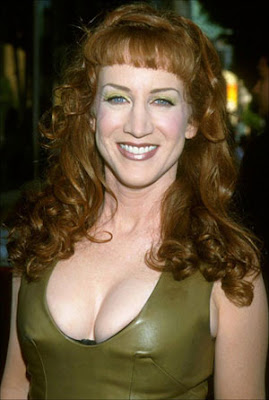 This story is based on actual events.

Here I sit, in bed on a Wednesday night while my Kathy Griffin-loving boyfriend sleeps heavily beside me. Dreaming of Griffin no doubt.
I outed Joe a Griffinite early in our relationship. His KG tendencies were glaring. For example: stalling on Bravo whenever My Life on the D-List was on, reciting two-bit KG jokes and insisting I dye my hair red, cut my bangs short and curl them under like a German puff pastry.
Well, those last two are a lie. But I’m sure the bangs crossed his mind.
Before you throw your hands in the air and call me a lying rat, understand that the first time I saw My Life On The D-List, it was at Joe’s apartment. The second and third time – Joe’s again.
“You’re in love with Kathy Griffin,” I cried.
“No, I’m not.”
“Yes you are. You love her rolled bangs.”
“What are you talking about?”
“You want Griffin.”
And so it went on. And on. Whenever an opportunity presented itself to call Joe a card-carrying Griffinite, I would and still do.
“Yes, you’re right,” he’d sigh, humoring me like you would a child. “I’m in love with Kathy Griffin,”
This faux-admission was satisfaction enough. I was, and am, the most obnoxious girl on the swing set.
Up until last week Joe’s Griffin fascination was limited to my unfettered whims. He had tuned in three times to Life on the D-List, confessed once that yes he thought the show was entertaining and like always my self-fulfilling delusions and knack for exaggeration had convinced me Joe was president of the Kathy Club. But alas, as evidence waned I tired of the game. If the KG glove don’t fit, I must acquit. Eventually I forgot that my boyfriend was a closeted Griffinite.
Until two weeks ago …
On our way home from Tampa after Father’s Day dinner at his parents, I hit play on his car stero and Griffin’s standup act For Your Consideration came on.
I made an indigested face as I went angry ape on the eject button. 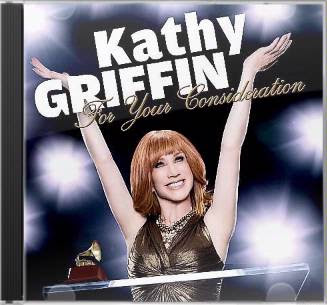 “A-ha!” I screamed, holding the Griffin CD in the air like I’d ripped out a still-beating heart. “I knew it, Griffinite.”

(This is ridiculous, he said. You planted it. What? I shrieked. Am I that absurd? My brother borrowed the car, he explained. It’s probably his.)

And thus I dropped the conversation. Was it because I finally believed I had contrived 75 percent of this infatuation? And even if that was the case, ain’t no shame in a 25 percent crush on Kathy Griffin.
I dropped it was because I wanted to listen to the CD and see for myself if the ginger was worth her weight in bangs.