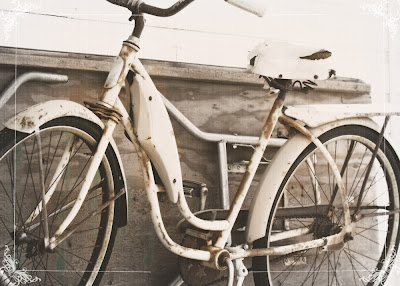 This is a story about a bicycle, and the power a bicycle had over my life when I was about 21 years old.

His name was Ross (yes, he was a he) and I first laid eyes on him when I was dog sitting for my Aunt Shirley, who lived next door to my Nana and Papa in Brant, N.Y.

Brant, N.Y. is one town over from North Collins, and it is where all my mother’s relatives live. Most of them live on Brant-North Collins Road, a winding, rural, two-lane stretch that cuts through Southeastern Erie County. It is also the same road I grew up on five miles north of my Nana, my Aunt Shirley, my Uncle Joe, my Aunt Helen and so on …

By the time Brant-North Collins Road gets to my house it is called Langford Road.
Once you pass my house, Langford Road drops down a hill, runs past Crances Superette, past Aaron Skora’s house, past the Friedman farmhouse, past Fox Road and the New Oregon Church and ends in a valley, where two brothers named Ed and Mike Snashall used to live.
For the purpose of this story, I will call Langford Road Route 249, which is its official Department of Transportation designation.

Save for high-speed traffic and the usual blind spots, Route 249 is a perfect road for cycling, and its paths through the towns of Farnham, Brant and North Collins have not changed since 1935.

Ross was the first bicycle I pedaled on Route 249 that didn’t have training wheels. He was a clunker of a 10-speed I spotted hanging upside down from ceiling rafters in Aunt Shirley’s basement. The only fetching thing about Ross was was that under the dust, he actually had a brand name. See here. And here.

The day I handed my aunt $25, I pedaled Ross home and pledged out loud to my mother that I would bike at every opportunity until I dropped 25 pounds.
(A side note: At 21 I weighed 25 pounds more than I do now, which is what happens when you party in the woods at 17, 18, 19 and 20.)
Beer-belly up and feeling pretty shitty about it, I stuck to my plan.
Ross and I were inseparable. He was rusty and so was I, and we welded together like fuzzy blue corrosion. He was a boy bike and therefore had the boy-bike bar, and I didn’t mind that I had a circa-1983 boy bike with a chain that required so much grease I would go to bed with oil skids on my calves. I only cringed when Ross would, without warning, switch gears every time I stood up to pedal.
Clunk-clunk.
But even that was OK, as I bragged to friends that I had found myself the only automatic transmission bicycle in town.
“You’re like a born-again biker,” said Ro (the best friend.)
And I was totally evangelical about cycling. I’m certain I logged 300 miles on Ross in one summer. I worked as a recreation director at a day camp four miles from home, and I’d bike it nearly every day with a lock box that contained the day’s lunch money on my back – 15 pounds in dimes, nickels and quarters.
Just for the hell of it, I would pedal 30 miles into the suburbs listening to the usual mixed tapes. Ani DiFranco. Indigo Girls. Counting Crows. George Clinton. When the A side would end, I’d flip it to B. Often on these 30-mile rides I would have to flip a tape three times.
A couple months in I recruited Ro, who I forced up Route 249 in 95-degree heat, holding her water bottle out like a carrot, taunting her with it until she reached the top of the hill. It was, she says, the worst and the best motivation she ever endured.
When fall came I was 15 pounds lighter and totally addicted to the road. Sometimes, when I reached the top of a steep one I would cry, not out of frustration but out of a profound sense of accomplishment. And sometimes, on those long even stretches, I would belt out whatever song I was listening to on my mother’s little yellow Walkman and glare maniacally at slack-jawed, bug-eyed truck drivers as they banged past.
When winter came I insisted on pedaling through light snowfall. December air is intoxicating and I used to pop a peppermint candy before a long December ride just to heighten the taste.
When January came and the air howled through my ears, I would wear a headband to cushion the stabs. And when eventually, inevitably, snow would blanket my town, I would pout about how I couldn’t wait to move to Florida, where I would bike every day.
But of course that didn’t happen. I moved here in the fall of 2004, 25 pounds lighter and with a Schwinn bicycle I bought a year after pedaling Ross from one end of Western New York to other.
The Schwinn cost me close to $300, and though it took me on a 65-mile ride around Lake Chautauqua in Upstate NY, and across the state of Rhode Island for a last-hurrah trip Ro and I planned the summer before I left for Florida, it lacked Ross’ depth of character. It didn’t have an automatic transmission. It’s paint wasn’t peeling and and it didn’t have a name. It was of course, totally tricked out with a tachometer, dual water bottles, a flashing rear light and gel seat, and shortly after I moved to Sarasota it was stolen outside of the Selby Public Library.
Lucky for my waistline, I never chunked on the 25 pounds I lost from three years of devout cycling. And yet the road fever is extinguished. I’ve tried since to rekindle it (by assuming that if bought a nicer Schwinn it would return) but the compulsion to blaze 30 miles in one day has yet to sock me.
Until now.
Two stolen Schwinns later, I’m back at Square One with a $40 Target bike, trying to explain to Joe how important it is that he ride with me.
He’s making headway. Slowly.
Which is another story for another day …
—
PS. Bicycle photograph by Julie Frame. For more of her work click here. To purchase photographs click here.