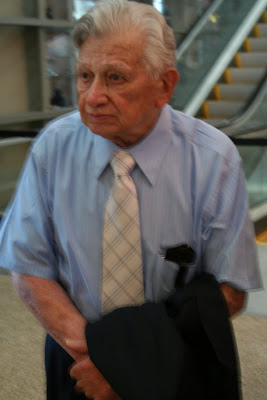 I stayed with Joe’s grandpa a few weeks ago. I started this post while we watched a baseball game on the couch:

Joe’s Grandpa Ra (his mother’s father) has lived with Joe’s parents since 1985. When the Bardi family moved to Tampa in 1989, Grandpa Ra moved into a garage-converted apartment separated by two doors and a laundry room.

Last month he celebrated his 90th birthday. Save for the cane he keeps by his blue recliner, Grandpa Ra isnt hearing impaired, memory impaired or anything impaired come to think of it.

He’s also three times the cook I’ll ever be.

A Brooklyn, N.Y. native, Grandpa Ra was a diehard Brooklyn Dodgers fan until Walter O’Malley moved the team to Los Angeles in 1958. In the years that followed, Grandpa Ra begrudingly rooted for The NY Mets.

Joe says he still hasn’t forgiven O’Malley for the move and when I asked Grandpa about it, he said, “Joe’s goddamn right.”

So I persisted.
“You’re still upset about it after all these years?”
And he shouted, “UPSET?! Agghht.”

Me: “If the Rays make it to the playoffs, will you go to a game?”
Grandpa: “Agghht. I don’t like going to the games because I have to get up so many times to go to the bathroom.”
Me: “Even if it’s the playoffs?”
Grandpa: “Agghht. Can I fix you a sandwich?”
(In the middle of this conversation, Joe walked through the living room and announced that he was going to take a shower.)
Grandpa: “Why dont you just jump in the pool?”

Joe laughed. Shook his head and walked into his parents’ house presumably to take a shower. Grandpa shrugged, made the agghht noise and turned his attention back to the TV presumably to the baseball game he’d been watching.

“You know,” he rasped. “Lou Gehrig. They called him the Iron Man, and then he got a disease and just like that he was gone.”
“Yeah, it’s pretty sad.” I said.
“Iron Man. Agghht. He lived two years after he got that disease.”
To change the subject, I asked Grandpa Ra if he ever caught a baseball during a game.
He smiled and said yes:
“At a Philadelphia-Mets game at Shea Stadium. MaryAnn wasn’t married yet. They tried to kick us out. They said I interfered with the play. They come over and ask me for the ball back. ‘Hey,’ they said, ‘you either give us the ball back or we make you leave.’ I said no. And I tell you what, they made us move, and they gave us better seats than we had before. The whole family. We had the best seats in the house.”