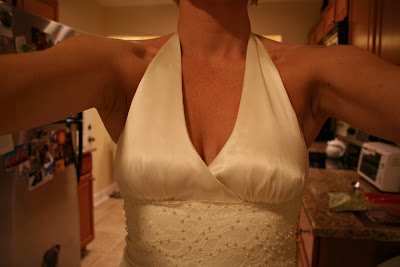 To be honest, I’ve put more thought into purchasing a six-pack of Charmin toilet paper.
…
I bought my wedding dress last month for $128 at White House|Black Market, and I returned it last week not because I didn’t like it, but because I thought I could do better.
Also because toothpastes have caused greater fits of indecision.
I blame the tree frog who showed up by our front door last month, who for one week, no matter where I moved him to, would return to our front door to hibernate precariously close to the welcome mat.

Remembering a former new age-y boss, who once confessed to me during a long Christmas shift at Waldenbooks, that he had a groundhog spirit guide, I decided to reference the frog in Ted Andrews book, Animal Speak.

According to Andrews, if a frog has presented itself, “it may be time to breathe new life into an old project or goal.”

The frog is a symbol of fertility, rebirth and resurrection. Since I’m in no hurry to get preggers, I took this is as a message to get cracking on The Book, which I realize has nothing to do with returning The Dress.

But you know, I digress.

Armed with frog knowledge I took off to purchase a present for a friend in downtown St. Pete, and as usual, I passed a gaggle of bums, and as usual, one of them called out to me.

“M’am,” he croaked. “Can you spare some change so I can get ointment for my foot.”

This is a new one, I thought. Foot ointment. Surely this bum – I’ll call him Jed – has milked other ailments in the past, but foot ailments? C’mon, dude. Wear shoes and your feet won’t slough off.

Mildly irritated, I looked at Jed’s foot.
Sure enough the shit was horrible. Propped up on a curb, looking as if it had been shot, the foot was purplish, bulbous and the wound was the size of a fist and oozing something green. His toes, what I could see of them, looked gangrenous.

I reached into my purse, pulled out a dollar bill, handed it to Jed and snapped, “That foot. Is dis-gusting.”

Jed took the dollar bill and nodded gratefully, his ruddy face creasing in the afternoon sun like an origami crane. It hit me just then, like a sack of bricks to the belly, that bums are ageless. Not ageless in the sense that they are young, but ageless in the sense that they are without an age. To those of us who pass them by, bums are just bums with no names and no ages. No numbers and letters to hang over their heads. Just time.

Humanity is a funny thing when it socks you. Wrinkled by dirt, and wounded by the absence of time or perhaps by the weight of time, I blushed when Jed thanked me. When I passed the bum sitting to him, I handed that guy a dollar bill and said, “take your friend to a walk-in clinic.”
The last thing on my mind was a wedding dress, but then I passed White House|Black Market on the corner of 2nd Avenue and 2nd Street. And though I’ve never purchased anything from this yuppity boutique, I’m a fan of simple semantics. A store named White House Black Market that sells only white and black merchandise is a store after my utilitarian heart.
I instantly spotted the lone ivory sheath hanging on a back rack in the oft-forgotten clearance corner, and for the helluvit I asked to try it on. To the delight of the women behind the counter, it fit like a kind of satin liquid – save for a teensy bit of gut-sucking and an obvious granny panty line.

“Linda,” said the one saleswoman. “Get over here. You’re not gonna believe how well this dress fits.”

“Like a glove!” Squealed Linda. “Oo! We’ve been waiting for someone to buy this dress!”

Oh Lord, I thought. My Cinderella moment, and here I am still contemplating Jed’s seeping foot.
I asked one of them to unzip me so could I purchase it because after all, it fit like a glove and when you’re wired like me, you don’t question the significance of that.

“Return it?” They snapped. “Why would you return it?”

“In case I find something better.”
This was apparently the wrong thing to say, because as I left the store, bag in hand, both women forgot to say goodbye, good day or good anything for that matter.
Sashaying past my guardian bum angels, I winked. Frugal, no-frills and with a 30-day return policy, I had just bought my wedding dress. Or at least, I was dating my wedding dress.
It was simple, so ho-hum that it slid easily behind our bedroom drapes. And when Joe got home from work I boasted about the price like I had just purchased two-for-one lamp chops at the downtown butcher.
“Wow. $128,” he said. “Nicely done.”
So not a Big Deal that it’s behind the bedroom drapes. But don’t look, I said. It’s still a wedding dress goddammit.

And then, two weeks later I returned it. I think the saleswomen had a bet, because when I walked in with the dress in a Target bag, the one smirked at the other like, Itoldyouso.

On my way up 2nd Avenue I passed Ann Taylor, walked inside and purchased a fetching tweed number for the rehearsal dinner.

Guess what?
It fit like a glove.
—
PS. The dress pictured above is the one I didn’t keep. It was unfussy, prettier than some dresses and less pretty than others. It was slightly beaded and cheaply priced, but in the end, not the dress for me. We had too much in common.