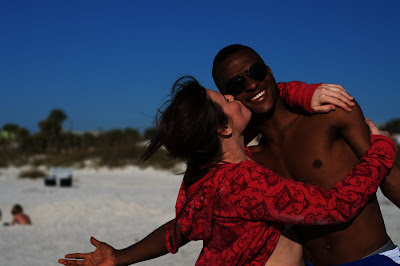 This is Ricci and Mbaye.

If you’ve met them, you know they’re a pretty dynamic couple.
Ricci moved to Senegal a year ago.
To say she moved there “to find herself,” would totally undersell her career ambitions and gut instincts.
She’s a remarkable photographer with an adventurous soul. And like all of us, she settles into comfort zones and second guesses her impulses, of which she has many.
When we were both journalists living in downtown Sarasota, Ricci would frolic around my shanty cottage in her bathing suit, reminiscing about the beach picnic we had just had as if it had happened 30 years ago. I suppose it’s because she knows a good thing when she’s got it. That, and she’s grateful for moments. Not stuff.
But Ricci utterly thrives when she’s plucked herself out of a comfort zone. Some flowers live OK in the shade but blossom in the sun. Such is the case with the Ricci species.
Last January, the night before her flight to Dakar, Ricci called me to debate her decision to move to West Africa.
“Buck up,” I said. “Board the GD plane. Africa was all you could talk about for months. If you turn around now, you’ll have shackled your brilliant whims and awesome plans to fear and anxiety.”
In truth, I wasn’t that eloquent and Ricci called several friends that day who were all likely to say jump, so of course she boarded the plane. Had she dialed my German grandmother I’m afraid she’d have accepted a full-time job as a staff writer for a magazine in Chicago with medical, dental and a 401K.
So Ricci moved to Dakar and worked as a correspondent/photographer for Voice of America, a radio and television broadcasting service governed by the United States and stationed in countries around the word.
And so it was, that as my life became increasingly domestic hers became fiercely independent. At night I’d browse her blog, blown away by the pictures – Bill Clinton on an AIDS mission, the president of Iran at an Islamic Summit, men in wheelchairs playing basketball, big-bellied women stirring vats of cous-cous, children sliding off the backs of beached whales, goats getting slaughtered in the street …
I was so proud of her – mostly for politely stomaching goat intestine soup – that tears wet my laptop. Every now and then she’d post a picture of herself, and even in a headscarf and dusty pants I could tell she was euphoric.
Then she met Mbaye, a soccer player with a come-what-may attitude and contagious smile. They dated for nine months in Dakar and then Ricci moved back to Chicago.

A month later she flew back to Dakar. By Thanksgiving she and Mbaye were back in the states – Mbaye for the first time in his life.

Rather than explain any of this I’ll dig up an old e-mail written by Ricci in bullet-point fashion, as I’m sure she was writing it while filing a story about Senegalese scrabble champions, while photographing a sword-juggling monkey, while carrying on a conversation (in French) with a soothsayer, while daydreaming of malted milkshakes.

Heids,
Filed the story and now ready to file my story with you.

Not one to stop at a visitors visa, Ricci contacted a sports agent in the U.S., who arranged for Mbaye to try out for several soccer teams on the East Coast. In between tryouts they stayed with me for a weekend in St. Pete.

I interviewed the couple earlier this month on a sun-drenched stretch of interstate on route to Sarasota. Since Mbaye speaks only French and Wolof – his native Senegalese language – and since the only French sentence I know goes something like, “Ohh la la j’ai une rendevous avec David dans 20 minutes …” I asked Ricci to translate.

Note: Unless Mbaye gets signed to an American soccer team he will have to return to Dakar in May.

Mbaye, are you nervous about your soccer tryout next week?
(Ricci translates)
“He says he’s a little nervous because he doesn’t know who he’s going to meet and if they’ll be as nice as they were last time.”

Ricci, are you nervous?
“I’m nervous about him flying by himself, about him getting lost at the airport or something.”

You don’t feel the fate of your relationship hangs on whether or not he makes the team?
“I just have to think we’re going to work it out no matter what happens. If he makes the team, great. If he doesn’t we’ll figure something out.”

Have your communication skills improved, dating someone who doesn’t speak English?
“If we have a fight — and it’s usually me who gets mad because he rarely gets mad — I want to make sure I say how I feel correctly in French. And after I go through it in my head I realize if I can’t explain it simply in terms he can understand, then it’s probably not worth getting mad over because it’s convoluted and more my problem than his.”

You’ve learned to not overreact.
“There’s a level of communication that has to be there because sometimes when you speak the same language, you just assume what somebody means when they say something. For us, when I say something, it’s like this is what I’m saying, but this is what I mean.”

What do you guys fight about?
(Translates into French for Mbaye)
Ricci: “I don’t think we’ve had a big blow-out fight.”
(Mbaye interrupts in French.)
Ricci: “Oh yeah. We had one in Senegal.”
(Mbaye again.)
Ricci: “It was over money.”
(Mbaye again.)
Ricci: “And we got in one once when we got in a car and I didn’t know where I was going. I was freaking out and he was l like, ‘Don’t freak out you’re going to get in an accident.’”

Mbaye (in broken English): “She is never calm.”

Ricci: “One time I was calm and peaceful and he was like, ‘What’s wrong?’ and I said, ‘Nothing, why?’ And he said, ‘When the volcano is quiet one must question why.’”

Did Mbaye have anxiety about coming to the United States?
“He worried that my friends were going to think he was different or maybe not a good guy. He wasn’t afraid that they would be mean. He just figured they’d act weird around him.”

Did we act weird?
(Translates)
“He says no. He says all my friends were so nice and took such good care of him.”

Does he have a favorite American food?
(Translates)
“He says he has a stomach he doesn’t understand. It accepts everything that goes into it.”

How has your relationship changed in the United States?
“In Africa he knew how to get around and he knew the language and I was the person who didn’t know what was going on. If we’d have to get something done, he would know exactly what to do and I wouldn’t even ask questions. In Africa we never spent the night together. There were days we wouldn’t see each other. And here, I don’t think we’ve been apart more than an hour — once when he flew to Charleston for a tryout. I was worried at first that we would get sick of each other, but we’ve gotten along better the more we’re together.”

(Translates into French for Mbaye.)

“He says the relationship is better here. When we were apart I’d call him 20 times a day.”

Because your insecurities are magnified when you’re apart. That’s pretty normal, I think.
“Yeah. We fought more in Senegal than we do here.”

Were you worried Mbaye wouldn’t adapt to American shizzle?
“I was worried he might get homesick, but I wasn’t worried about him adapting at all.”

Ricci, how would you describe your relationship with Mbaye?
“It’s easy. It’s almost like … I don’t know … I’m happy. Girls always say, ‘I want to find The One. I want to find The One,’ and when you think about it, it’s like, oh this is it. Anticlimactic is the wrong word because it has a negative connotation, but I don’t know … it just feels good.”

Finding The One was less dramatic than you thought.
“Yes, I guess.”

The people in your life better be comfortable around cameras. Does Mbaye ever tire of being your model?
“He loves it. He always jokes he’s the poorest model in the world.”

Is it frustrating for him to not be able to communicate with your friends?
(Translates)
“He says he’s not frustrated. He’s sorry he can’t speak English but the fact that people try to talk to him is the most important thing. He says there’s a lot a smile and hand gestures can communicate.”

In what ways is this relationship different than others you’ve had?
“Well, we don’t speak English and we’re biracial. Those are the obvious ways it’s different. He makes me a better person. I feel like I have to be a better person because he raises the bar for me. Sometimes I’m like, but what do I do for you?”

How has the biracial thing played out?
“I have a lot of friends who date Senegalese men, but it’s also like ‘he’s with her because she has money and connections. Or, ‘he’s using her to get further or whatever.’ Someone said to me once when we were applying for a visa – ‘how do you know he’s not just using you for the visa?”

That’s a rotten thing to say.
“First of all I said, ‘He wouldn’t do that because he’s a good guy and an honest person.’ Second of all, there’s a level of trust in every relationship. How do you know your girlfriend is not cheating on you? You have to trust people are who they say they are in any relationship.”

But generally you haven’t felt discriminated against?
“Most of my friends are super liberal and accepting. I’m sure there are some people who have problems with it but then it’s like, it’s not your relationship. I’d rather be with him and have these kinds of problems than be with somebody who doesn’t make me happy and have people look at us like we are – quote – normal.”

And what does Mbaye think?
(Translates)
“He says people look at us strangely because we’re beautiful.”
—

PS. The picture above was taken during a turkey sammie picnic on St. Pete Beach. For a glorious list of sammie recipes click here.