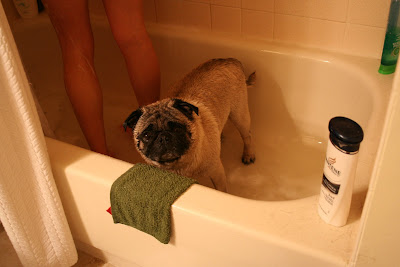 It’s always fun to tell people I shower with the pug. The reactions I get are all over the board.

If it’s someone who has a dog, he/she will likely say: “How do you get him to stand in the SHOWER? Isn’t he freaked out by the WATER?”
If it’s a woman who doesn’t have a dog, but wants one super badly, but her square-of-a-husband won’t let her, she will say: “AWWW. That’s so cute! I didn’t think dogs took showers!” (Motioning to her husband to pay closer attention.) “Her dog takes showers with her! Isn’t that a hoot?”
If it’s anyone (male or female) who doesn’t have a dog/isn’t a dog person/ doesn’t want to be a dog person, they will say: “That’s kind of messed up, don’t you think?”
If it’s a guy whose not necessarily a dog-lover or a dog-hater, but just a pervert, he will say: “That’s hot, dude. Don’t drop the soap.”
If it’s a kindred spirit who also showers with their dog, and understands the utilitarian genius of this method, he/she will say: “Yeah. Isn’t it a whole lot easier than bathing him? I figure if I’m gonna get soaked anyway, might as well do it in the shower. I started doing it when he was a puppy. The dog’s totally cool with it.”
On that note. Good morning and happy showering, or whatever it is you do to get clean in the morning.
—
PS. The pug does not shower every day. It’s bad for his coat. Also: he doesn’t always use Pantene. It’s usually Hartz Oatmeal dog shampoo, however HARTZ’s flea and tick medicine and collars are reportedly killing cats and dogs, so I’m not buying their products anymore. Shampoo suggestions anyone?