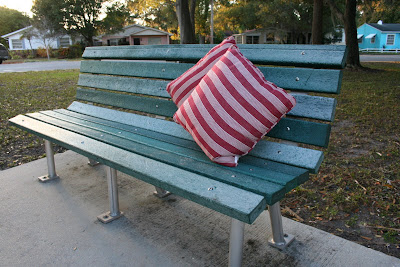 My boyfriend keeps hitting the snooze on his radio alarm clock.

It’s how he wakes up every morning before work – to 20-second blasts of 1980s pop songs.

Me? I’m usually in my office by then, drinking Timmy Hos coffee out of an Artvoice mug.

Who would’ve thought when I swiped this Artvoice mug eight years ago from the dimly-lit, alt-weekly newspaper I interned at in Buffalo, that I’d be sitting in my office, in my house, in St. Petersburg, Fla., sipping Timmy Hos in a blue nightgown and red slippers?

“Buying bread from a man in Brussels.
He was six-foot-four and full of muscles.
I said, ‘Do you speak-a my language?’
He just smiled and gave me a vegemite sandwich.”

Although Valentines Day has come and gone, I’m going to put this post up now before it totally gets away from me.

Since I still feel like the new kid on the blog block, one of my New Year’s resolutions was to introduce Lance to some friends, which I did by following new peeps on Twitter. I hadn’t set out to befriend only mommies on mommy blogs, but apparently Lance likes moms.

“Lying in a den in Bombay.
With a slack jaw, and not much to say.
I said to the man, ‘Are you trying to tempt me
Because I come from the land of plenty?’
And he said …”

Not being a mommy, I didn’t think I’d be drawn to mommy blogs (oh, and to one pseudo-daddy blog), but upon further reading, I found myself oddly captivated by these men and women and their child-rearing highs and lows, the likes of which I won’t get into. That’s their job.

Suffice it say, reading mommy blogs has kept me equally awestruck and birth-controlled.

Jill over at Modern Mommy Blog, is a 29-year-old social worker whose New Year’s resolutions include ingesting fish oil every day and avoiding alcoholic beverages. I think it’s refreshing that she broke both of these promises by Super Bowl Sunday, because in my opinion, cutting alcohol out of your life while introducing your body to fish oil sounds grim.

Jill has a one-year-old daughter, and is rooting for Kate Winslet in the Oscars. She entered herself in a Valentines Day contest sponsored by Linda, a scrapbooking, stay-at-home mother-of-three in Mississippi.

On Valentines Day, Jill, the Modern Mommy, spread a little “bloggy love” my way by posting about Lance on her blog, which was so solid of her.

In the spirit of paying it forward, I recommend Modern Mommy to those of you who have children/are about to have children/might one day have children/are parents to pugs (or other such animals)/can appreciate a network of supportive family-friendly folks even if you are crass, self-indulgent and light-years away from having children/enjoy a pretty blog layout with meaningful posts/appreciate good advice and loyal webships (web friendships.)

“We are young, heartache to heartache we stand.
No promises, no demands …”

—
PS. My father gave my mother 1,600 lb. of corn for Valentines Day. After receiving such an awesome gift, she helped him lug the corn bags into the basement to dump into their corn burner hopper. 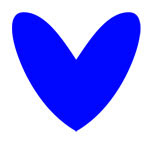