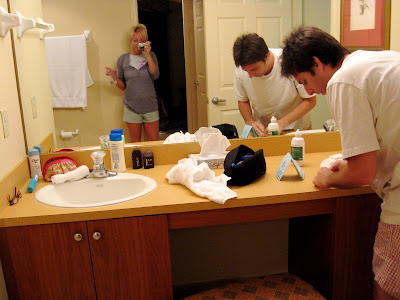 I had a wedding song before I met Joe.

It was a ditty by a girl on a guitar. Burned onto a mixed CD given to me by my old friend Sarah, whose imaginary cowboy this blog is named after.
I wasn’t even sure who sang the song, or what it was titled, until my friend Ricci and I listened to it on repeat one afternoon in my Sarasota cracker shack, and Ricci went home, Googled the lyrics and discovered it was by Rosie Thomas and that the title was Wedding Day.
So much for love

But it’s all right

The lyrics were neither romantic, nor bitter, somewhere in between Jewel and Alanis Morissette, which suited me just fine from 2005 to 2007. I was single then. Somewhere in between grounded and orbiting space. Working in a marble yard. Trying to write a novel. Living in a 1920s bungalow with exposed rafters and no air conditioning. No television. No wireless Internet. Just a black laptop computer that no longer held a charge, that was given to me by my best friend Ro in exchange for one roundtrip airplane ticket from Buffalo to Tampa.

It had been her computer when she was in college. My friend Troy called it my Carrie Bradshaw laptop. Having never seen Sex and the City, I had no idea Carrie Bradshaw had a laptop, much less the fact that it was, according to Troy, a big black one with loud keys. But I thought it was pretty rad that when I was single I owned a Sex and the City prop, a chic accessory for a girl from the sticks.

Ricci and I hung on every word of that song. Blasted it when we’d drive from my bungalow to the public pool to swim laps. Loved that we didn’t need boyfriends to have a wedding song. Loved that the lyrics evoked a sense of bliss some girls only experienced on their wedding days.

Obviously, eventually, we got boyfriends.

I’ve had enough of love
It feels good to give up
So good to be good to myself
I’m gonna get on the highway with no destination
And plenty of vision in mind
And I’m gonna drive to the ocean
Go skinny dipping
Blow kisses to venus and mars
When Joe and I got engaged this fall, we didn’t start discussing wedding details until months after the Question Had Been Popped. When we got on the subject of wedding songs it seemed neither of us had any one song in mind, so I suggested Etta James’ At Last, not realizing Beyonce had recorded a version of it for her role in Cadillac Records, also not realizing the Obamas would dance to it five million times the night of the inauguration.
Recently, I interviewed Bobby Vinton, the 1960s crooner responsible for such wicked ballads as, Blue Velvet, Roses are Red (My Love), I Love How You Love Me, Mr. Lonely, and the 1970s Polish love polka, My Melody of Love.
I did my fair share of Internet research before meeting Vinton, downloading corky love songs my Nana probably loves, leaving Joe voice mail messages to the tune of Blue Velvet. The innocent schmaltz had kind of grown on me – and not in an ironic hipster way.
I started thinking: what kind of love song best describes me and Joe, the couple?
After I left my sunglasses at Bobby Vinton’s beach estate, I figured we had to go with a Vinton ballad. It lends itself to a good story and I’ll be damned if I pass up a good story, even if I have to dance to a Polish love polka on my wedding night. Besides, Joe digs the fact that Ray Liotta and Lorraine Bracco dance to Roses are Red in Goodfellas.
I’m gonna drive under skyline and sunshine
Drink good wine in vineyards
And get asked to dance
I’m gonna be carefree and let nothing pass me by
Never ever again

This song was my wedding song when I was single. It was appropriate. I could relate to it. I could belt it out in cars. I could be single to it.

What I need now is a song I can be married to.
—
PS. The picture was taken in the first two months of our relationship. We were staying at a hotel in Fort Lauderdale and we had just gotten out of bed. I remember thinking at the moment, I’m happy just watching this man put his contacts in.

PPS. For more on Rosie Thomas.