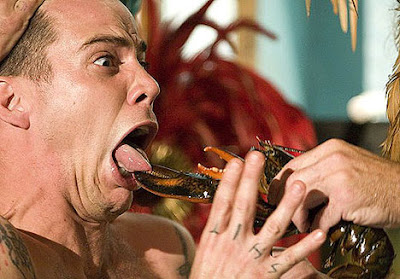 ABC, you’ve got to be kidding me.

I apologize if I’m late to the game here, but after watching The Insider tonight I learned that Steve-O, the jackass (at left) with a lobster clamped to his tongue, was hauled off Dancing With the Stars by an ambulance last week, after injuring his back rehearsing the tango.

You expect people to believe that Steve-O, a man who stapled his nuts to his thighs, pierced his ass cheeks together, swallowed a worm through his nose, injected vodka (intravenously) though his legs and pole-vaulted through glass doors, ceiling fans, tables, and trees; Steve-O has a bad back.

ABC, have you no shame?

First you script Bachelor Jason Mesnick’s “change of heart,” then you stick his jilted cheerleader on (surprise, surprise) Dancing With the Stars, and now you’re telling us that Steve-O, a scrawny coke addict who once turned his tattooed body into a human dartboard, has suffered a pinched nerve?

What next? Steve-O signs on for four episodes of Grey’s Anatomy, wherein he undergoes back surgery and falls in love with a cancer-stricken Katherine Heigl?

In other news, it’s me and Joe’s two-year anniversary. I insisted he wear his Area 51 T shirt to celebrate the occasion.

Man, he looks adorable in it. 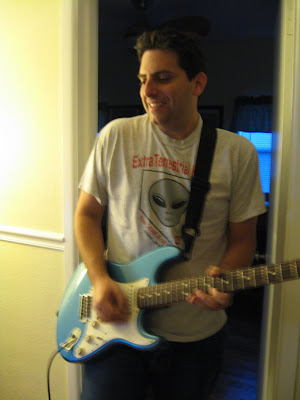