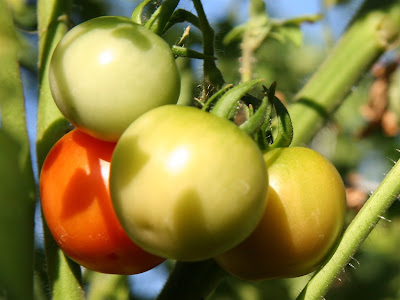 I‘m suffering from a supreme case of writer’s block.

So what do I do? Well. As always, there’s Lance.
I come here more than I should whenever I’m stuck on a story; a paying story. It helps me get over uninspired humps.
Sometimes.
Today I spotted my first big, red tomato hanging off one of two tomato plants I planted three months ago in the front yard.
If anything should inspire me, it should be this. I’ve never grown an edible thing in my life. Well, basil. But that doesn’t count. The pug could grow basil in his food bowl if he slobbered on it every day.
The tomato plants were my mom and Joe’s idea. There were four big pots in our front yard when we moved into this house, in which the previous owner had planted squatty palms and purple ferns. When we closed on the property, the squatty palms and purple ferns were scorched from too much sun and wilting from too little water, so I pulled them out of the pots and stuck them in the ground, where they are much happier and healthier.
In two pots I planted tomatoes and oregano. In the other two, I planted marigolds and bushy pink flowers. Within a month my bushy pink flowers had tripled in size. And my tomato vines! Ah! I had so many little green buds I felt like Fannie Flagg. The front of my house had suddenly taken on a Better Homes and Gardens look.
When a storm whipped through the neighborhood last week, I ran out the front door to stake my bent tomato vines to sturdy twigs. After much nurturing, whispering and watering, I couldn’t bear the thought of losing my tomatoes. They looked so pathetic in the wind and rain, bent over like a child with a stomachache. I never felt so much like my Oma than when I called for Joe in a panicked yelp, to bring me scissors and string so I could tie my vines.
Now that I’ve got this big red one sort of poking out at me, willing me to pick it, slice it and serve it over mozzarella and balsamic, I’m freaking out. What if it’s too soon? What if it’s too late?
If you know anything about tomatoes, please share your wisdom. I’m a novice vegetable grower, whose new hero is this guy: former Baltimore Orioles manager Earl Weaver. 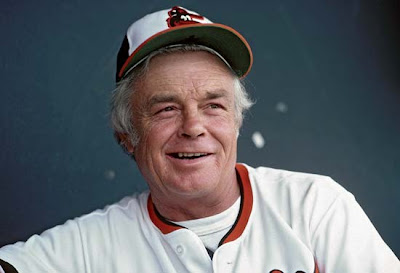 Weaver, the 5-foot-7 short-tempered, smack-talking “Earl of Baltimore,” used to grow tomato plants down the left field line in Baltimore’s old Memorial Stadium. He and head groundskeeper Pat Santarone had a contest every summer to see who could grow the biggest, juiciest crop. Rumor has it Santarone once grew a tomato so big it wouldn’t fit in his ball cap.
According to former first basemen Boog Powell, the mens’ tomatoes were so large, “one slice would way overlap the bread.” And according to Cal Ripken Jr., whose father worked for the Orioles in the 1960s and 1970s, Weaver used to fertilize his giant tomatoes in the Orioles bullpen using horse manure lifted from the Preakness Stakes.
I wonder if pug manure would have the same effect.
—
PS. To everyone who donated to my Ride for Roswell: THANK YOU! THANK YOU! In two weeks I raised $675 for the Roswell Park Cancer Institute – $175 OVER my initial fundraising goal.
PPS. About Saturday’s hair post: the top photo was the $50 haircut. In these trying economic times I suggest patronizing beauty schools. No one will ever know your ‘do cost five bucks. Unless of course you blog about it.