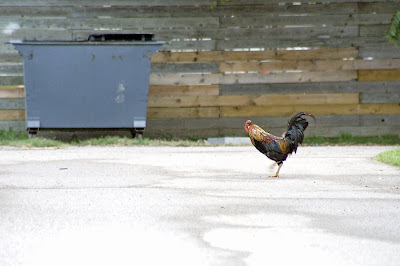 And in addition to this, I’m pleased to report that I have a new animal spirit guide.
Behold: my rooster.
I’ve written about meaningful coincidences and animal totems before.
The last time I wrote about synchronicity I was on vacation in the Florida Panhandle trying to figure out the significance of seeing butterfly nets. And the last time I wrote about animal spirit guides, in particular my frog spirit guide, I got a tongue lashing from Natasha up in Alberta, Canada.
This time it’s cocks.
Someone in the neighborhood has a rooster. How else can I explain the barnyard opera I’m hearing in the morning when I walk the pug?
The first time I heard it, I froze in my tracks.
Could it be? I asked myself. A rooster crowing in the City of St. Pete? I wrote it off as a Basset Hound and continued walking the obstinate pug.
Again it crowed.
I looked down at my pug to see if maybe he had heard it too, but he was uncharacteristically uncurious and continued about his sniffing, pissing and grunting. So I let it go – until Thursday morning, when I heard it again.
Well, I’ll be damned, I said. A goddamn rooster living in the city!
When I returned to the house with this knowledge, I had to tell Joe.
“Must be someone knows you’ve got problems getting out of bed in the morning.”
He grunted. Rolled over on his side.
“A rooster in our neighborhood! How exciting! First tomatoes, now this. Man, it’s like I’m back home again.”
To further illustrate my point, I started mimicking the cock.
“If it’s not a rooster it sure sounds like one,” I said as I shuffled to the kitchen to make Joe’s usual turkey sammie.
Five minutes later, I went digging for a little card to stick in his Tupperware container. I’m lame and sappy and sometimes put notes in my fiancé’s lunch. I’ve got this box of random note cards with one note card for every day of the year. They’re tiny – the size of a matchbook – and therefore function perfectly as embarrassing lunch love notes.
So I reached into my box of 365 note cards (at this point there are about 300 left) and I pulled one at random. Now remember: no two cards in this collection are alike, making what happened next quite impressive.
On the front of the card was of course, a devilish rooster. But I reckon you already knew that.
So now it seems a rooster is my shepherd, signaling the end of the tree frog’s reign.
As for what exactly the rooster means, I found this:

Rooster (aka Cock): Rooster is a symbol of resurrection and sexuality as he heralds in the dawn of a new day. Often, good news is at hand when Rooster appears in Dreamtime. However, watchfulness is key as the dreamer must be ever aware of being overly arrogant or cocky. Rooster reminds us to avoid fighting at all costs. The lesson is to respect others while honoring ourselves, or we just might find ourselves ensnared in a ruse of our own making.

The Rooster is a solar symbol and represents sexuality. Those with a Rooster as a Totem may have had past lives as early Christians or ancient Greeks. A Rooster totem brings enthusiasm and humor and a sense of optimism. The Rooster is a totem of great power and mystery with ties to the ancient past and clues to your own hidden powers. It is the enemy of evil spirits and can bound them with the light of day.

Cockadoodledoo! I already love this totem way better than the tree frog.
—
PS. The misguided rooster above was photographed by McBeth. For more evocative storytelling pictures like this, visit McBeth’s Flickr photostream. She photographs vexing toothbrush packages, puzzling road signs, tea bags and much, much more!