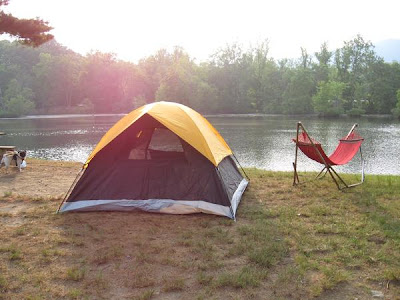 In the summer of 2007 – less than three months after I started dating Joe – I took a road trip from Southwest Florida to the Oregon Coast. I was gone for a little over a month. Just me and the pug in a borrowed tent. With a loose plan, and a 1997 Honda Civic stocked with jars of peanut butter and cans of vegetable soup, the pug and I camped alone in state parks from Asheville, N.C. to Klamath Falls, Ore.
It was, to be brief, the most amazing and fantastic adventure I’ve ever taken. It’s been almost two years now and I was thinking today about how inspired, how bold and how awe-struck I was at the time. How utterly fearless.
I didn’t have a blog blog then. Instead I chronicled the trip in a series of newspaper stories that I emailed to my editor by ripping off wireless Internet connections in Holiday Inn Express parking lots.
In addition to that column, which Joe so aptly named “Heidi Go Seek” after I called him in Osceola, Arkansas to pick his brain for headline suggestions, I also wrote these rambling MySpace “blog” posts. Here are the first four – unedited, un-tweaked, grammatical errors and all:
—
Sunday, June 03, 2007

Savannah, Georgia
All I know of Savannah is that my motel has free wireless. As my Nana would say, “It rained like the dickens,” so I did the sensible thing and booked a room at America’s Best Value Inn, watched “John Tucker Must Die” and ate popcorn chicken from Sonic.

I had all the intentions of setting up camp on Skidaway Island, Ga., reading dusty literature and writing something that would make someone sigh. Instead I surfed DevilSpace with it being free wireless and all, broke my daily allowance of $30, showered under hot water with Dove soap and cursed the misfortune of having tailed Tropical Storm Barry from St. Petersburg to Savannah.

Asheville, North Carolina
Asheville is like a good peanut butter sandwich. It is exactly how I imagined it. Creamy. Easy to spread. Fun to lick off my fingers. Good on apples. Plentiful. Generous. Good even when it’s not brand name.

My pug likes Asheville better than Savannah but I credit the weather with that. It didn’t rain! Although last night the wind picked up for a good 30 minutes and in that 30 minutes my tent shook so badly I could only imagine eight burly men looking like the Brawny paper towel dude shoving the thing back and forth like a game of hot potato. Cub was trembling and I don’t use the word trembling often.

I was told this trip might kill me. People are creeps and pyschos. Who the christ sleeps in a tent across the country alone, my nana asked me. I was told to carry sharp or heavy blunt objects. Upon talking to a police officer in Sarasota I was told to get a concealed weapons permit and a handgun. My father refused to discuss this trip with me anytime I called, as if not talking about it would make me stay safely in Sarasota where I would spend the summer walking my dog on the beach, getting $58 tickets for … walking my dog on the beach. (Which I got the day before I left town. Fellow Sarasota dog-lovers stay away from Shell Beach!)

Anway, back in Asheville my neighbors one tent over are from Chicago. Their names are Bob and Jen. Jen brought me over laundry detergent and Bob likes to fish for bass. On this trip however he’s mostly snagged snapping turtles. A crying shame really. One turtle was so flipping huge the hook broke off in his mouth. I asked Bob if the hook would find it’s way out of the turtle’s mouth and he sort of shrugged, a cigar wedged between his lips and said, “Ya never know.”

When Jen asked me if I was traveling alone I hesitated. (“Goddamit never tell ’em you’re alone,” my father warned.) Well, duh. It doesn’t take CSI Miami to figure out the chick with the pug are without human company.

I wanted to say, sometimes yes.

“No,” I said (with forced bravado.) “There are more Bobs and Jens than creeps and pyschos, right?”

On to Gaitlinburg, Tenn. I hear Gatlinburg is the Las Vegas of the mountains.

Gatlinburg, Tennessee
I’m lying in my tent at 11:30 at night. It’s raining out. Pretty little popcorn rain in a one-man-one-pug tent. If Joe were here I’d be whispering, “This is soooo romaaantic.”

So! These are the Smoky Mountains. It’s true what they say about them too- there is a blue-green haze that hovers over the forests in Tennessee. Like North Carolina is burning incense and the smoke is wafting to Tennessee.

It’s thundering out in a pleasant way. Please let is stay pleasant all night. Cubbie is snoring. I just ate six chocolate donuts, felt guilty, brushed my teeth, rid myself of guilt breath.

The owner of Jellystone Park drives around on a golf cart with a big “T” on the back of it. He loves my pug. Has one himself. Heard from the girl up at the front desk that I’m camping alone. Said, “If there’s anything you need darling you just let me know.” Then he pet my pug and said, “You got yerself a good companion,” and drove off.

My neigbors one tent over are about 25-ish. Sean and Rachel from Baton Rouge. They got engaged beside a waterfall yesterday.

“It was a piece of junk waterfall,” Sean said. “But she said yes so that’s all that matters.”

Rachel invited me over for hotdogs and s’mores. I took a raincheck, hung in my hammock and read a book. I’m digging the Yogi Bear park … although this thunderstorm is really starting to pick up. Ey! I can barely hear my iTunes.

Memphis, Tennessee
I can’t sleep in Memphis, Tennessee. This time I booked a room at the Deeelux, Inn where I could give Cubbie a bath. He’s snoring at my feet in this big scary bed. Maybe he’s happy now that the tree sap is scrubbed from his fur. Maybe he doesn’t care. I hate motels. I much prefer camping in the woods to staying in a motel alone. There are two flies in this room. Two dopey flies. I swatted one earlier with a washcloth and killed it. I set the washcloth on the bedside table ready for the next kill. Also on the bedside table — my pepper spray and swiss army knife. I hate motels.

Memphis was a whirlwind, last minute detour in the name of my father. He has no idea I decided to skip Louisville, KY in favor of Memphis so I could go to Graceland to purchase an Elvis baseball cap for him for Father’s Day. My dad loves Elvis. He’s never been to Memphis. If he were on this trip he would insist on following the tour guide throughout the entire tour.

He’d be the guy asking the questions along the way.
“Really? So Elvis loved orange marmalade on his toast? Get outta town! Say, is that his original baby blanket?”
By the time I got to Graceland the place was closed. So I took my pug for a walk up Elvis Presley Blvd. upon which he took a shit. And then I walked across the street to a (nearly) 24-hour Elvis emporium.

The most overpriced souvenir in Graceland — gold sunglasses. And I wanted them too! I wanted them to wear around Sarasota for when I go through the Wendys Drive Thru. Instead I got an Elvis bikini for ten bucks. It was a wise choice. I’ll wear it to the YMCA on Euclid Ave.

There’s this scene from, “A Thing Called Love” in which Samantha Mathis and River Phoenix get to Graceland but Graceland’s closed for the night. That’s how I felt tonight.

Hmm … I’m thinking something like the Bluebird Cafe. I’ll Google it.
—
PS. Pictured above is my tent in Asheville, N.C. I purchased the red collapsable hammock from a Vietnamese five-and-dime in North Sarasota. If you look at the picture and squint to the far left, you’ll see Cubbie, my pug. If I’ve failed to identify Cubbie until now, I apologize. He wanted to remain anonymous and requested that I simply refer to him as “pug,” but since I’m not editing these old entries, I must (by default) reveal his true identity. If you want to friend Cubbie on Facebook, click here.