END_OF_DOCUMENT_TOKEN_TO_BE_REPLACED

Florence + The Machine said it best.

Dog Days Are Over can mean so many things to so many people.

But to me it means summer is over.

END_OF_DOCUMENT_TOKEN_TO_BE_REPLACED 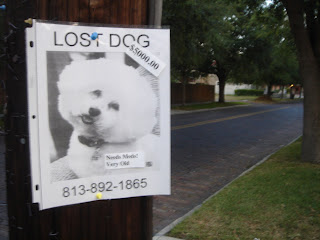 It’s 12:03 a.m. and I’m sitting in the dark under a blanket on my couch. I can’t sleep. The thought of this lost Bichon Frise in my neighborhood has been killing me for weeks.
Where is this dog?
Did someone steal him/her?
Was he/she killed by a passing car?
Did he/she run away with a maverick beagle in town?
Is he/she sucking on spaghetti from a restaurant dumpster in an alley off Central Avenue?

About a month ago (maybe longer) someone started posting these flyers on street posts and trees in Old Northeast. At first they simply asked for the safe return of their dog, who I might add “needs medicine,” and is “very old” and when returned “no questions asked.”

The reward is set at $5,000. Today while driving north on 4th Street I noticed the Bichon’s heartbroken owners had rented billboard space at 22nd Ave. Billboard space!

female.
elderly.
a single-dog owner.
sweet-natured and trusting of other people.
fairly well-off.
sensitive.
pampering of the dog.
owns several framed photos of the dog (pre-dognapping).

Please will someone return this dog.

Ps. I just found this St. Pete Times story. The dog’s name is Pooh Bear and Joe and I were (almost) absolutely right about its owner, Patricia Bonati, known to Old Northeast dog lovers as The Poodle Lady. According to Bonati, she was walking her dogs – some of which are rescued poodles – along the Vinoy Basin around 5:45 a.m. on April 7 when the 15-year-old Pooh Bear, apparently off his leash, mysteriously disappeared. Bonati said, “It’s like the Earth swallowed my dog.”