END_OF_DOCUMENT_TOKEN_TO_BE_REPLACED

The summer I turned 14, I went camping with my mother, my sisters, my friends June and Ann and their mother Wilma.

It was a girls-only kind of weekend. The dads stayed home.

We rented a cabin in the Pennsylvania woods, all of us girls, piled into one two-story bungalow.

Within five minutes of driving into camp I had surveyed the outlying trails for roller skating routes. And yes, I mean roller skate not roller blade. For years I skated on a pair of hand-me-down quads with bright blue wheels. For some reason I never crossed over to inline skates.

June, however, had a slick pair of roller blades — the newest hottest ones on the market.

As we puttered through the campground in Wilma’s minivan, the two of us peered out the windows, our noses pressed to the glass. When we spotted our Everest, we gasped.

It was the granddaddy of all downhill trails. Paved with crumbling black top, riddled with potholes and ending in a sharp plummet, it was the most treacherous trail we’d ever laid eyes on. If it had been any steeper, it would have been a cliff.

As Wilma’s van rounded the corner, June and I implicitly settled on our first skating route. We were fearless.

As soon as the last sleeping bag had been dragged from the van and carried up to our loft, June and I strapped on our skates and announced that we were hitting the trails.

“Don’t go down that hill by the front gate,” my mother said.

June and I exchanged eye rolls.

“I’m serious,” she continued. “DO NOT go down that hill.”

And off we went. June in her roller blades, me in my skates.

Unconcerned for our safety, we blatantly defied our mothers’ warnings to steer clear of the Everest trail. We made a beeline for the summit.

I was leading the way in my clumsy quads, stumbling over potholes, flying through the campground like a jacked up roller derby girl. June was on my heels, gliding in her neon blades.

We rolled to the top of the hill and paused only briefly to take in the free-fall, before howling with glee and pushing ourselves down the incline.

We began hurtling downhill faster than we imagined. Within seconds, the rush turned to terror. We were on a suicide mission.

Using the back brakes on her blades, June managed to stop herself with remarkable ease.

I was not so lucky.

I was flying down a hill on roller skates at 30 mph and unlike June’s brakes, mine were located on the front of my skates. The toe stop.

The longer I thought about braking, the more out of control I became. I was picking up speed faster than Picabo Street, except instead of snow-plowing my way to a halt, I fell knee-first into the pavement and slid for 10 feet, my shin skidding across the concrete.

The resulting road rash ran from my knee to my ankle.

I pulled off my skates. Pulled off my socks. As June tiptoed to my side, bawling over my fall, I asked her to give me her socks.

“To stop the bleeding,” I replied.

END_OF_DOCUMENT_TOKEN_TO_BE_REPLACED 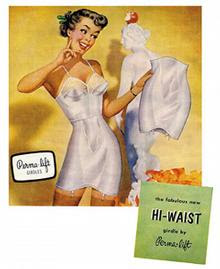 Mail from my Nana is the best thing on earth.

She likes to write me letters on tree bark and toilet paper.

Last month I scribbled her a Valentine on a maxi pad.

In return she sent me this note with a magazine clipping inside.

Just had to send you this article that I received from Aunt Shirl. Oh, how true it is! I certainly remember my first “rubber” Playtex girdle. Several of my friends were sold on them. They flattened your tummy, but pushed the excess up to your boobs. Really a tight fit. It would get mighty uncomfortable, especially if a girl had a large stomach and hips. God, what we didn’t do to try and look glamorous. Nowadays the girls go panty-free!

Well, I just had to get this to you for your Lance. I think it’s an article everyone will enjoy – I certainly did. Have a great week and say hello to Joe for me.

The magazine clipping, if you can read it: 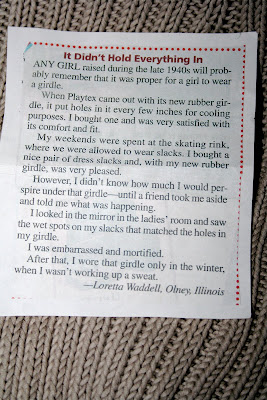 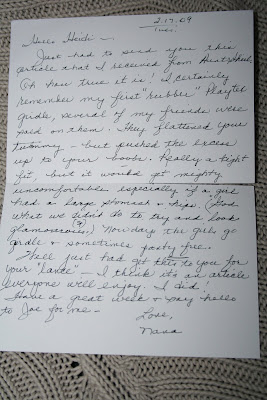 And Nana’s trademark cursive of course.