END_OF_DOCUMENT_TOKEN_TO_BE_REPLACED

The night before I had Henry, we hit up a nice seafood restaurant with my family. (Screw eggplant. Apparently salmon induces labor.)

My sister, PK, had to use the restroom, so she asked the waiter where it was located and he motioned toward the back of the restaurant.

When she arrived at the women’s room, the door was closed and locked. Apparently there was only one stall.

After five minutes, she softly knocked twice to indicate she meant business.

A woman answered in an angry bellow.

“There’s a bathroom on the first floor,” she snarled.

PK was stunned. The wildebeest behind the door was clearly annoyed. Had she done something wrong? Wasn’t knocking common etiquette among people waiting to use the john? She hadn’t banged on the door. Oddly, she felt like she should apologize. But for what?

“I’d use the bathroom on the first floor if I were you,” she grunted. “I’m gonna be here a while.”

I’m not a fitness fanatic. I do not own one piece of Under Armour clothing. I do not eat egg whites and I do not drink whey protein shakes. True, the bathroom cupboards in my house contain at least three different types of vitamins. However, they belong to Joe.

I mention this only to reiterate that I’m not a fitness fanatic.

Except that, I am. Kind of.

I signed up for a triathlon for many, many reasons. I signed up because I love the idea of pushing my body, conditioning it to do things it is perfectly capable of doing. There’s no reason why I can’t run a triathlon. I’m a healthy 28-year-old with legs that move fairly swift in an organized one-foot-in-front-of-the-other fashion that is conducive to both running and biking. Secondly, my father taught me how to swim when I was five years old, so I don’t see why I should waste those skills now that I’m an adult.

It’s like being handed all the tools to build a house. Of course you have to want to be a carpenter first and therein lies the truth: I want to be an athlete.

That’s the practical explanation for why I signed up for a triathlon; why I embarked on a three-mile-a-day running regimen for a month, even though I was certain I would hate it, even though I had failed at previous attempts at running throughout various points of my life.

I started running because I needed to be able to run four miles after swimming a 1/2 mile and biking 10. I started swimming 40 laps in a 50-meter pool because without preparing for the first leg of the race, I’d have suffered in the second and third legs.

Those are the facts. The philosophical reasons, while heavier, are what keep me moving every day.

I signed up for a triathlon because I wanted to suck up every ounce of my health, because one day, despite my spirit, it might not be there. Because there are people in my life who I love more than anything in the world whose bodies aren’t so able. Because I’ve got youth and health on my side and I should be celebrating this good fortune every day.

END_OF_DOCUMENT_TOKEN_TO_BE_REPLACED

This post should go up at exactly 7 a.m., which is when the Escape From Fort Desoto Triathlon is scheduled to begin. If you’re reading this between 7 a.m. and 7:40, I’m probably flailing around in the Gulf of Mexico in a one-piece bathing suit and swim cap. Also: if you’re up at 7 a.m., go back to bed. You’re up too early. If you’re reading this between 7:45 and 8:00, I’m probably approaching mile 5 on my Bianchi. If it’s 9 a.m., I’m on foot, tackling the thing I feared most — running.

If you’re my husband Joe, you’re blowing the minds of every person who knows you by being awake and out of the house at 5:30 a.m. on a Saturday. I love you, my pep squad of one.

Oh, and happy birthday to me! 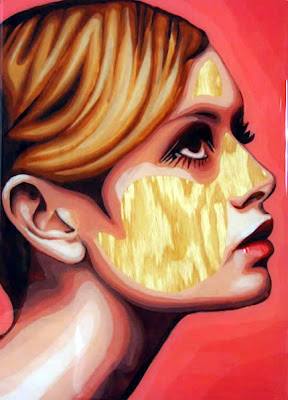 Resolutions are for the birds. To quit doing some thing, or to start doing another thing, there has to be a motivating factor.

For example, I stopped chewing gum in 8th grade because it disgusted me. Cows chew on cud. People should know better. Plus, it’s too conveniently stuck to the bottom of things – chairs, shoes, desks, bathroom stalls, a pair of Levi’s Silver Tabs in 7th grade homeroom.
I had a friend who liked to shove her chewed gum into whatever bottle of beer she was drinking. As a child, this same friend also placed chewed gum on her cafeteria lunch tray while she ate, and then after lunch, would pop the gum back into her mouth for more chewing.
I brush my teeth twice a day, floss occasionally, and avoid garlic. If my breath reeks, I pop a peppermint. Aint nothing so rank inside my mouth that a hard candy can’t lick, which is why I have not chewed gum in 13 years.
Canadian artist Jason Kronenwald created this portrait of 1960s pixie, Twiggy, using people’s chewed bubble gum. Check out his series of Gum Blondes here. To create his paintings he hires a team of chewers to chomp on wads of gum, (he prefers the texture of Trident) and using a bevy of colorful flavors, which Kronenwald asks his chewers to mix inside their mouths, he stretches the gum across planks of plywood and begins molding the visages of famous blondes.

As a blonde, I’m mildly insulted by the connotation of this art. Hey, Kronenwald: ask your grandma to start chewing on those Bit-O-Honeys she keeps in her candy jar, then have her fork over her dentures. The sticky aftermath will make for a nice series of brunettes.

My father is disgusted with his beer gut, so to whittle it he started walking today from his house on Langford Road to the town highway department on Eden Road. (It’s about three miles.) I called my mother this morning to talk about overpriced wedding photographers, and my father, gung ho and out of breath, answered the cell phone.

“I’m almost to the highway department.”

“You sound out of breath.”

“And you’re walking to the highway department?”

“Did you bring the cell phone in case you needed to call Mom to pick you up?”

“I brought the cell phone in case I fell dead from a heart attack I could call 911 before I hit the ground.”

“What did you and Mom do for New Years Eve?” 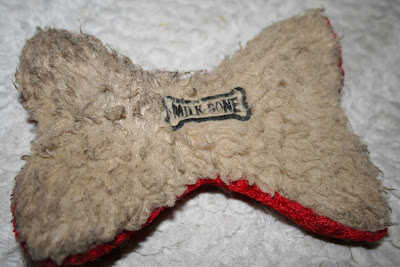 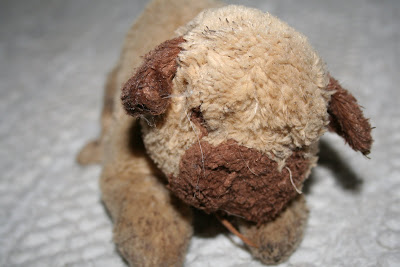 Milk Bone. Smells like corn chips. Makes for a good game of tug-of-war and that’s about it. Oma prefers this baby to the others because she says she can hold one end without it sliming her fingers. 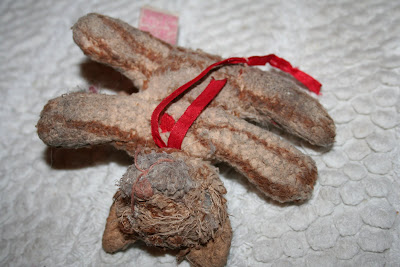 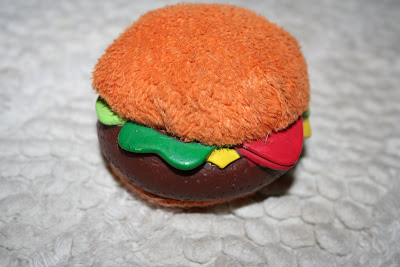 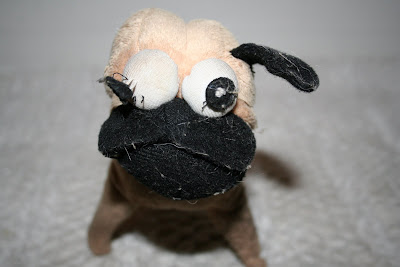 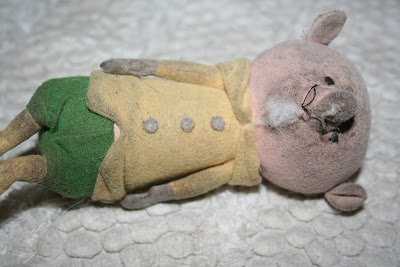 Pug Baby Jr. A Ty Beanie Baby from Hamburg, NY. By far the dog’s favorite toy. Smells like vomit. Makes for a good game of fetch. Is often lost under/in bed. When touched wet will disgust even the most hardy of dog lovers. Both eyes are gone. I sewed the sockets shut.
The Singing Cat. The only pug baby with a functioning sound box. Contrary to what you’d expect, The Singing Cat doesn’t meow but rings instead. Whenever it goes off Joe thinks my cell phone is ringing.
The Hamburger Baby. Squeaks. Is the least favorite of the dog’s pug babies. The Hamburger Baby is like the fat kid at recess. The last one picked for dodge ball.

Elfin Baby. Needs to be sewn. Not a favorite. Came from Japan. A present from my Japanese exchange student, Yuuki. Used to have a hat.