About four months ago, maybe longer, Joe ran to CVS for some odds and ends. I didn’t go because I had a headache, which I believe was the primary reason for the late-night CVS run. We were out of Advil. As Joe grabbed his keys and headed for the door, he asked me if I needed anything else from the store.

Razors? What kind of razors?

“Just a pack of BICs or whatever.”

I never buy expensive razors. Certainly not the kind that come in blister packs and require $18 disposable heads and definitely not the kind Jewel sold her soul to peddle in 2003.

When Joe returned from CVS, not only had he purchased a family-sized bottle of Advil, (the kind one might buy using a Sam’s Club card) he had also purchased a Gillette Venus Breeze 2-in-1 razor with shave gel bars.

Have you guys seen this thing? It looks like an ordinary razor except that the head is cushioned by a sort of slimy gel helmet. Like the razor suffered a concussion and needed head padding.

“What the hell kind of a contraption is this?” I asked.

“You said you needed a razor,” he replied.

PS. Happy 34th birthday, Joe. While I’ve not been very good at buying replacement heads for my Venus Breeze, I love that you’ve made it an option. Thank you, as always, for broadening my horizons. 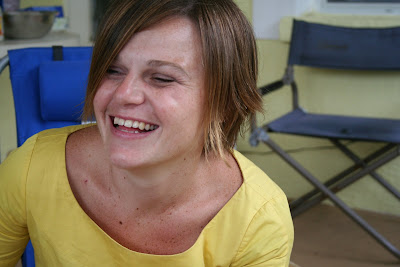 My friend Ricci is a bit of an inspiration. She’s reading this so I’ll refrain from using clichés. When we first started at the same newspaper in Sarasota we were instructed by the editor to avoid clichés like the plague.

“She was frazzled. Maybe she was nervous, or the opposite of nervous. Now that I know her, I know she’s what my father would call a sparkplug, but like the blue scooter she bought one month earlier from a man in North Sarasota, sometimes Ricci’s would misfire. When that happened if we were there for her, she’d be OK. On her first day of work she took out a watermelon, sliced it in half, pulled out a shaker of salt and doused it right there at her desk.”

We became fast friends. We signed up for salsa-dancing classes. We swam opposite laps in the same lane at the YMCA pool. At Halloween we carved disturbing faces into pumpkins. We took photographs of each other jumping in the air for no reason other than the pictures looked cool. We drank two-for-one vodka cranberry tumblers at the same bar downtown. When I started riding a bike, Ricci got one too. We shared clothes. We fought. The worst fight we ever had was on top of the Ringling Bridge and I swear on my father’s temper, I never fought with anyone like I did with Ricci that day. We yelled at a decibel so fierce passing coots on Bird Key shot us the stink eye. Then we moved on.

We canoed. We kayaked. I dragged her to cheesy films. She dragged me to dark arty films. We sat for hours on Shell Beach reading magazines and gossiping. We dissected each other like 8th graders skinning bullfrogs. I was 23 and she was 22.

When Ricci announced last year she was moving to Africa I never doubted it. Senegal, she said. Dakar, to be exact. She had a plan, but it was a Ricci plan. She’d photograph Senegalese women and freelance for any outfit that would pay while living with an African family in the city. She’d live there for three months, return to the states, move to Chicago and start working for American newspapers again. Two months in she called me using another American journalist’s international cell phone.

It’s been six months. She’s back in town for just a week to shoot a wedding in Jacksonville. My grill master friend Roger threw her a BBQ Wednesday night and because Ricci’s a tough one to tie down for more than 15 minutes I managed a partial interview.

What was your biggest worry on the flight back to Sarasota?
R: That I’d be that girl. The ‘This one time in Africa’ girl.’ 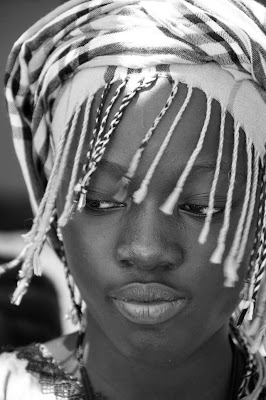 Yeah, because you know in a room full of journalists we’ve got no tolerance for self promoters.
R: It’s a lot easier though. I don’t talk as much as I used to. In Africa I don’t speak the language fluently so I guess it’s easier for me to stay quiet now.

How do you describe Sarasota to your peeps in Senegal?
R: There’s a lot of money and a lot of white people in Sarasota who don’t dance well. I have a proven theory – the more oppressed you are the better you dance. Dancing and money are inversely related.

What’s it like buying the necessities in Senegal. Like tampons?
R: There are too many choices here. I don’t deal well with decisions, you know that. In Senegal it’s like you have one brand. One choice. I prefer that.

What’s the most annoying response you’ve gotten from people in the states?
R: The jokes about Islam.

Do you rock that yellow dress in Senegal?
R: The lady I buy vegetables from gives me a hard time if I show my knees.

Is it weird as a journalist to come home to journalists?
R: Being around journalists … you guys listen better. Not to sound like a jerk or anything, but journalists are better listeners. I think there is a greater appreciation here for stories. Nobody’s eyes are glazing over when they see me.

Do the Senegalese have dogs?
R: No. There are no cute dogs over there. Mangy, mangy dogs. Nobody really has pets. Some foreigners have dogs. My friend has a dog but he keeps him on the roof. They’re not as nice to their dogs as we are over here. They kind of have a lot more shit to deal with, you know? Dogs aren’t extensions of their lives.

That’s a direct affront to me. And the pug.
R: Sorry it’s true.

What’s the nastiest thing you ate?
R: The goat intestine. That process … it was … well, to see the goat alive, being killed, dead and then eaten. I don’t know. It was weird because the night before the goat was killed I had a dream that I died.

Did you use a fork to stab the goat innards?
R: Everyone eats with their hands. But it’s like whenever they pray their hands must be clean and since they’re Muslims they pray fives times a day. The cab drivers keep sanitizer in their cars. And with eating you usually end up eating with everyone out of one giant bowl. At first it bothered me but it doesn’t anymore. Not after I realized how clean everyones hands are.

What’s the crapper like?
I peed in a hole in the ground when I was staying with Mama’s family. There was no shower curtain. The bathroom was all tiled. It’s like a self-cleaning vehicle. The water and soap from the shower washes everything in the room. I hate shower curtains now.
You’re mostly the same Ricci. But you’ve changed somehow …
R: I’m more calm now. I’ve got more faith not just in God, but in myself.
Epilogue: Ricci takes spectacular pictures. Some photographers get lucky. Not Ricci. She’s a wrangler. She stands on chairs. She climbs trees. She lies on streets. She zooms in on faces. She zooms out on action. Expressions are the hardest thing to capture and Ricci does it consistently. When pictures aren’t contrived, imagine for a second what the person taking them looks like. When Ricci takes pictures she looks like a chipmunk hunting for nuts, then storing them in her cheeks before winter.
The photo above is by Ricci. For more like it visit Ricci Media.