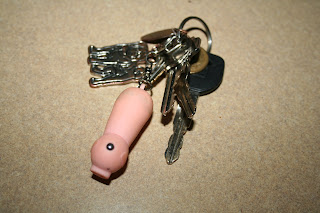 This pig keychain was a gift from Joe’s sister, Rosey. It lights up and oinks. But its oink sounds less, “Oink” and more “Quarr.”
Quarr.
One, I love pigs.
Two, I love pugs* and they’re not much different than pigs.
Three, I want a Pigasus tattoo to mimic the way Steinbeck used to “sign” his books followed by the latin expression: “Ad astra per alia porci.” (To the stars on the wings of a pig.)
I left my keys at Publix Sunday night. I’m not positive of this, but I’m pretty sure I left them in the chip aisle. (Joe and I labeled bags of Doritos with “Peabody Award Winning” labels printed off Stephen Colbert’s web site on Sunday night and I can’t think of any other aisle I lingered in for 10 minutes to sticker groceries.)
So I left them at Publix and when I called the store yesterday to ask if a set of keys had been turned in the woman who answered the phone asked: “Is there anything identifiable about the keys?”
I said: “The pig?”
She said: “We got em.”
One time while I was at a Rudy Giuliani  fundraiser in Sarasota (to photograph, not support the candidate) I met Jon Voight. I never actually saw Giuliani. But Voight, he shook my hand and in doing so accidentally squeezed the pig. It oinked.  Rather it quarred. He pulled back and said, “What was that?” I smirked and said, “It’s my pig.” And off Voight went.
Do not dismiss your goof-tastic keychains. One day you might run into Ed from “Deliverance” and wholly crap, bless your heat if you have a pig keychain and Voight thinks to himself, “Is she being cute with this thing?” And, like me, it takes months for the serendipitous-ness of the moment to sink in … and when it does you’re all-be-damned and wondering what it all means.
Anyway, Joe’s awake now. Our dog has to piss. “Merv Griffin’s Crosswords” is on and I’m about ready to go samurai on the TV. Nonetheless I have work to do. (From home today.)
Hell-o Dylan and a pot of Tim Hortons! I hope you have a good Tuesday.
*See Our dog, sidebar.