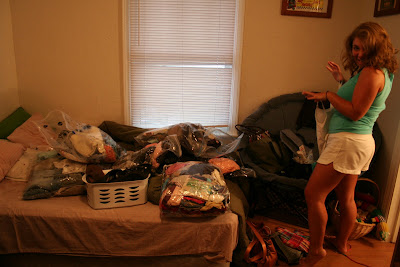 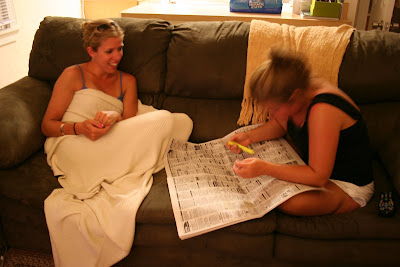 My sister PK got in last night via 1998 Ford Escort with her friend Erika. Here’s a Q&A with the Buffalo recruit:

What are you doing right now?
What does it look like I’m doing? I’m desperately looking for a job. [Closes the St. Pete Times.]

What was the worst part of the drive down from Buffalo?
West Virginia. Not knowing if my car would make it over the hills.

What was the best part of the drive?
The final hotel. The fact that the bed was so huge despite it being disgusting.

How many items of clothes can you fit in one of those vacuum-sealed bag?
Over 50 items.

Do you have them sorted according to item?
No I was stupid I didn’t do that. Now I just have bags exploding and I have to pick through them.

What’s the most you’re willing to spend on an apartment?
Assuming it’s just me and depending on the job, no more than $800.

Any idea yet on how you’re going to meet a man?
Networking.

What are you a CEO or something?
I know what I’m talking about.

Is there anything you forgot to pack?
Yes. My Pantene Pro-V Anti-Frizz Serum. (Points to head.)

What is your dream job?
My dream job? I really don’t know what it is. Just a place where I feel comfortable and work with people who are nice. I don’t care what kind of job it is.

What about Florida do you predict is going to drive you batty?
The traffic, the old people and people with that Florida air about them.

Florida air?
You know what I mean.

Is she from Florida?
She’s from Georgia. That’s close enough.

[PK’s friend Erika walks in the room and sits on the couch beside her.]

Erika, what kind of driver is PK?
I think Pam would agree with me. We had some moments. We had some oh shit moments.

PK, what kind of driver is Erika?
Erika couldn’t drive because she’s too long for my car and I also have lifts under my seat so she couldn’t drive. I told her I wouldn’t put her through that torture.
Erika: She kept saying ‘those lanky legs can’t fit in this car.’ My legs would probably get stuck on the pedal. It would be full gas the whole time.

What’s your fast food count at?
P: I took coupons with me for McDonald’s and I showed Erika how proud I was to have them and she said they only take them in New York and Pennsylvania. We didn’t discover that until West Virginia so we ended up at BK and she got cinnamon buns.
E: Only for a dollar though. I woofed those down. They put something in those.
P: You felt great after those cinnamon buns.
E: And for only a $1.

Spot any snazz vanity plates along the way?
P: Pretty Pam was our favorite plate.

Someone had a pretty Pam plate?
P: Believe it or not there are some pretty Pams out there.

What’s the garbage situation look like in your car? 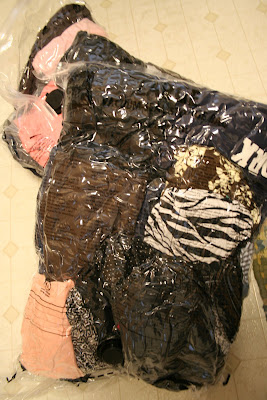 E: All our fast food accumulated by my feet.
P: It kept getting higher and higher until we returned the old McDonald’s wrappers at the window of a new McDonald’s.

What are your plans for tomorrow?
P: Frying at the beach.

What brand vegetable oil did you pick up at CVS?
P: It’s Banana Boat.

Any noticeable differences between the north and the south?
E: Oh God everyone was so friendly. We had to get used to that, how friendly people are. People here are really big at staring.
P: Like the guys at the gas station who made animal noises.
E: We had a group of guys making animal noises in Virginia. Like farm noises, actually I don’t even know if they were farm animals. I think they were wild animal noises.
P: It was like we got out of the car … like we were being birthed. Like it was labor.
E: And we’re both stretching and I see them out of the corner of my eye and I said, ‘Pam lets slide back in the car.’
P: They walked out of their way to our side of the pump.
E: They were gross industrial workers.
P: And they were making animal noises.

What’s the first thing you’re going to buy for your apartment?
E: You need bedding.
P: Well, I need a bed.

PS. The picture above is of a space-saving-air-sucking bag packed with clothes.