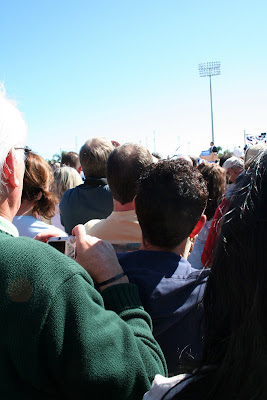 I should have gotten a press pass …

Attending Barack Obama’s rally today in Sarasota hadn’t occurred to me, until I was held up at University Parkway and U.S. 41 as Obama’s motorcade passed.
For the hell of it, I turned toward my buddy Roger’s favorite Ed Smith Stadium, and walked one mile to the field, where I ferreted my way through the town’s underground democrats.
Before I leave for my 4 p.m. massage, I’ll leave you with four observations from the ground:
1. One Obama supporter was in such a hurry to park his Ford pick-up truck that he drove it off the road and into a grassy ditch, where he instantly buried the back tires in the mud. I’m not sure how the christ he’s going to tow the thing out. He ran the hitch underground.
2. Two teenage boys discussing the nature of their mothers’ apathy: “My ma never votes,” said one boy. “Where does she live?” Asked the other. “Pennsylvania,” the boy replied. “Shit, dude. That’s a swing state,” said his friend.
3. Sarasota City Commissioner Fredd “Glossie” Atkins doing a kind of Christmas storefront Santa Claus jig in the front row bleachers. When the speech was over, Glossie held up five fingers and repeatedly yelled, “Five days.”
4. An exasperated man in a Montgomery Air Conditioning & Heating uniform elbowing his way through the crowd, frantic because he couldn’t find, “the wife.”