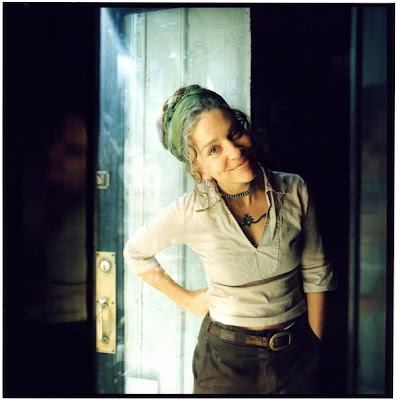 10 reasons why I love Ani DiFranco:

1. Her voice is creamy. Seriously. Like vanilla pudding. It’s a beautiful juxtaposition – somewhere between angelic and fierce. If Ani were singing shit about my pug, I’d turn up the volume and sing along. She’s that captivating.

2. Her songwriting is AMAZING. I picture her scratching out lyrics between coffee refills in diner booths. Or on the back porch of her home in Buffalo, under an awning, in the rain, making sense of bad relationships, her 20s, her 30s, politics and pollution.

3. She’s from Buffalo. My hometown. And without too much preaching, she became the poster child for a steel belt city with a reputation steeped in bad football jokes, blizzards and economic woes. A few years ago she purchased a historic church on the corner of West Tupper and Delaware Avenue, rehabbed it, reopened it as a music venue and called it Babeville.

4. She is 11 years older than me, but it never felt that way. In the mid-1990s, when I first started listening to Ani, newspapers and magazines labeled her militant, angsty, angry, gay, bisexual, feminist, rocker grrrl, younameit. As a teenager, I couldn’t think of a better chick to idolize. She was complex; a Rubik’s cube of sexual identity, with song lyrics like poems, marked by peaks and valleys in an emotional landscape not unlike the one I pounded. Britney Spears and I are the same age. (Arrggh! It’s true!) Yet it was Ani I latched onto like a long-distance pen pal. (Ani and Jewel to be exact.) From my bedroom in the middle of nowhere, with its pink walls and quilted bunk bed blankets, I spent my nights alternating between Ani and Jewel, a cross-pollination of a fan. Romantic and wispy. Pent-up and pissy.

5. She can fingerpick a hoedown beat like nobody’s business. Ani could pluck a love song using her guitar strings to clean out the grit from under her fingernails. She’s that fast and that good.

6. She’s a journalist’s wet dream. She’s funny, disarming and ridiculously quotable. (“Some people wear their heart up on their sleeve. I wear mine underneath my right pant leg, strapped to my boot.”) Even her terseness is eloquent. (“My songs are just little letters to me.”)

7. She’s a stubborn success story. Ani has repeatedly turned down baller contracts with major record companies. She formed Righteous Records in 1989 with Dale Anderson, a writer from The Buffalo News, and renamed the company Righteous Babe Records in 1994 after she and Anderson parted ways. The company now produces a growing list of emerging artists – Andrew Bird, Bitch and Animal, Arto Lindsay, Sara Lee and Hammell on Trial to name a few.

8. Her song, Angry Anymore, was my anthem for years. Listen to it. It’s cathartic.

9. Fuck you at the start of a refrain never sounded so pretty or so appropriate. Untouchable Face is a lyrical feat of genius.

PS. Joe took me to the Tampa Theatre last night to see Ani. The tickets were a Christmas present. (Thank you, Joe!) I cried tears of happiness during the show. It was dark, so no one saw.