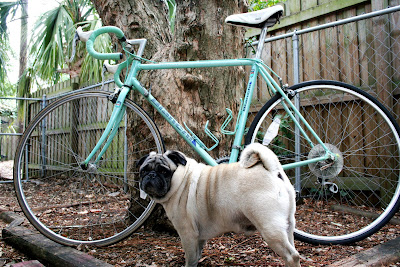 Light as a feather and the color of a robin’s egg, my Bianchi came from Salvation Army. She’s got pizza-cutter tires and handlebars shaped like my pug’s tail.
When I wedged her into the front seat of my Honda Civic, she contorted into a kind of fetal position, which made me think perhaps Bianchi was scared or sad, having just been pulled abruptly from the bike pile at a tidy Salvation Army store on 4th Street in St. Petersburg.
She’s a 23-year-old Italian with a stubborn saddle, caged pedals, soft tires and a nervous tick. I think her rear break might be chaffing against the rim, but with the proper tools and gentle touch she’ll be prime for riding long distances.
I hadn’t intended to get a 1986 Italian racing bike. My sister Heelya and best friend Ro are visiting next week and I wanted a third bicycle so we could pedal the Pinellas Trail together. I’ve been eyeing a tricked-out mountain bike for a month now and was fixing to shell out $500 for a better (and I mean way better) bike than the one I pedal now, but today’s little lesson in negotiation and good will has prompted me to forgo a new model in favor of a more seasoned cougar.
I pulled into Salvation Army today with two $20 bills in my wallet, feeling good about myself, my friends and the world. I’m on a new cash-only budget thanks to $3,000 in fraudulent charges at a Panama stereo store. My debit card number was stolen last week (perhaps in cyberspace) and when the bank told me I’d have have to wait a week for my new card, I decided now was as good a time as any to pay homage to my parents by paying for everything in cash.
Peering into the back stockroom at G.W., I asked one of the employees if there were any decent bikes for sale. One guy perked up and said, “Sure. We got a Tour de France bike out front.”
I figured he was pulling my chain, (bike pun!) but as I followed him out front to the parking lot where the robin egg blue Bianchi was parked, the vintage bike stuck out like Christie Brinkley … 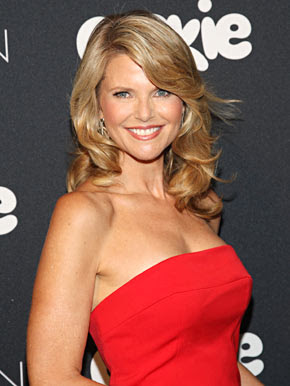 … in a sea of Tonya Hardings. 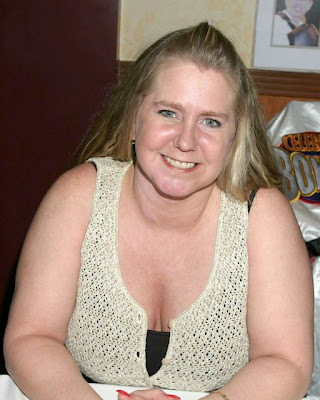 “It suits you,” the guy said.
“I’ll take it,” I replied, not knowing how much it would cost, but assuming not much.
So I wheeled it into the store and up to the counter, where an employee with a name tag that said JAYME asked, “You buying that bike?”
“Yup,” I said.
“Do you know how much it costs?” He asked incredulously.
“Um. No. How much does it cost?”
“Fifty bucks,” he said.
Before I could even get a word out, the man in line behind me said, “No way is that bike worth fifty bucks. Man, you’re rippin’ the girl off. Give it to her for 25.”
A woman standing in line behind the man chimed in:
“Fifty dollars! She’s gonna have to put new tires on that bike!”
“It’s an expensive racing bike,” the Salvation Army clerk snapped.
“It was an expensive bike,” scoffed the man behind me. “Man, that thing is old! Being that she’s a girl, she’s gonna have to pay someone to fix those tires.”
Slightly embarrassed by the attention I had drawn, but thrilled by its sitcom appeal, I quietly said to the clerk, “It’s OK. I came here thinking I’d get a deal. No biggie.”
Upon further inspection of the name tag, I noticed that JAYME was the store manager and as I turned to push the Bianchi back to the bike pile, Jayme sighed and said, “Alright. $35 and that’s as low as I’ll go.”
Forking over my money, I nodded at the male chauvinist behind me, grateful for his cojones. Although I don’t usually take kindly to being treated like a damsel, in this case I curtsied, grabbed my bicycle and headed home.
—
This isn’t my first love affair with a 1980s bicycle. I was once infatuated with a clunker 10-speed named Ross. For more on that torrid romance click here.