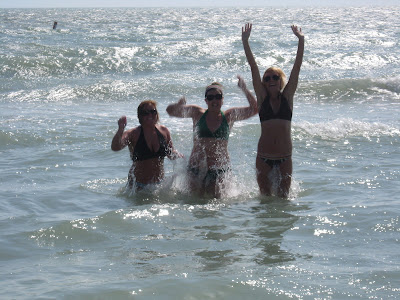 This is my 100th post. It’s a post I started at midnight about two weeks ago but fell asleep in the middle of writing. When I woke up the next morning, I was 27 years old, had a 9 a.m. phone interview with a mathematician from Maine, a cover story due about a ballet dancer from Houston and plans to go to the beach (see left) with my best friend Ro and sister Heelya.

I didn’t know I had it in me to stick with the Lance. I figured I’d get bored with it. Tire of writing about myself, my friends, my family, the odd ducks and lovable strangers that cross my path and make me laugh, cry, whisper and cuss.
I thought I’d get distracted. Find a new way to spend time while Joe was asleep. Take up abstract painting. Join a knitting circle. Volunteer at a nursing home. Start trading stocks online.
But here I am. Still Lancing. Truth is, I can’t shake it. I find a story in everything. So much so that’s it’s annoying. If you were to ask me to write 500 words on the sound a potato chip makes when it’s chewed, I’d give you 600 words and a sidebar on the texture of french onion dip. 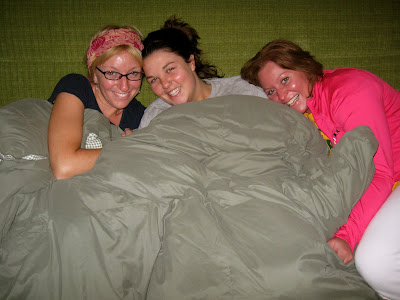 In the picture above you’ll find me on the left, Ro in the middle and Heelya on the right. Joe took it the night the girls arrived from Buffalo, just before we unfolded the pull-out sofa in his Man Cave and the girls fell asleep in a cocoon of down-filled blankets.
Ro and Heelya like nests. They like to burrow and they like to snuggle. I know because I spent many nights curled up beside either one of them, prattling on about things girls prattle on about.
Ro sleeps with her mouth open and Heelya talks and eats in her sleep. One night, when we were teenagers, I heard Heelya murmur something about French fries. Another night I caught her in the refrigerator, rummaging through the crisper for cheese slices.
Growing up, Heelya and I slept in bunk beds, alternating between the top and bottom bunk every few months. Whenever Heelya slept on top, I’d lay on the bottom with my feet planted on the planks of her bed, kicking her up in the air a good three inches just to aggravate her. One night when I was on the top bunk and Heelya was on the bottom bunk, my mattress fell through the weakened planks and landed on top of her head. 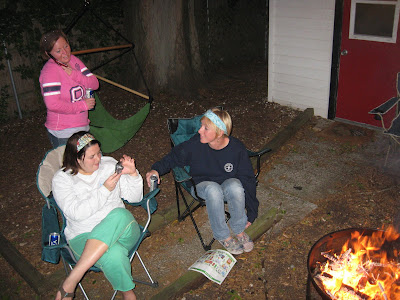 Basically Ro, Heelya and I spent the weekend laughing, catching up on nonsense, drinking beer and telling old stories around the campfire. There’s much more of course, but I’d be here all day if I were to write about it all. So I guess I’ll write about April 10, my birthday.
We had plans to go out to a Japanese steakhouse – me, Joe, Heelya, Ro and my sister PK – when around 7 p.m. PK, who lives an hour away, called to tell me she got in a car accident.
“Don’t freak, Heid. I’m fine,” she said, explaining that her car was towed from the scene and that the cop gave her a ride back to her apartment, and that for every day her car was in impound she would be charged a grotesque $100.
To avoid this monetary raping and to get PK up to St. Pete for my bachelorette weekend, I had no other choice but to load everyone in my car, drive an hour south to Sarasota, free the crinkled Escort from the impound lot and pick up PK – birthday or no birthday.
So at 9 p.m., with Joe in the front seat and Ro, Heelya and PK in the back, I pulled off a desolate street in North Sarasota, into a gravel parking lot guarded by angry dogs with no manners, where a Bubba with a belly like a bass drum unlocked a prison-high fence and mumbled that my sister’s car could be freed for $250 cash.
(Note: Heelya is in a Sophia Loren sun dress. Ro is in a Doris Day skirt. And Joe is wearing the faux suede gentleman’s blazer he reserves for television appearances and birthday parties. Remember, we were supposed to be at a Japanese steakhouse, sipping sake and watching a chef chop onions in the air using a Hattori Hanzo samurai sword.)
So at 9:15 p.m., with dapper Joe in the front seat and Ro, Heelya and ATM card-less PK in the back, I pulled into a SunTrust bank and withdrew enough money to recover a bent 1998 Ford Escort.
PK was pouting. I was bitching. Joe was deciding whether we should refuse to pay the after-hours fee. Ro was insisting the charges be itemized and Heelya was bitching about my bitching, suggesting I should just be happy we were all together.
And to be honest, though I was irritated and driving with night-blindness through a ghetto on my birthday, I was, actually, ecstatic we were all together.
When we returned to the impound lot with money in hand, the Bubba behind the gate barked at another Bubba to, “chain up the Escort and move ‘er out,” at which point Joe lost his cell phone in the dusty abyss.
As we followed the tow truck driver back to PK’s apartment, and as Joe began frantically searching the car for his cell phone, I remarked that my 1997 Honda Civic was dogging it with so many bodies weighing it down.
“Shit,” Joe muttered. “I must have dropped my cell phone in the parking lot.”
“You sure it’s not under the seat?” I asked.
“No,” he replied. “I checked there.”
“You sure it’s not in the glove box?” Ro asked.
“No, I checked there.”
“What about in my purse?” I asked.
“I looked through your purse.”
“Did you check in the door?” Ro asked.
“It’s not there.”
“What about under the seat?” Holly asked.
“IT’S NOT UNDER THE SEAT!”
And then the car fell silent until we got to PK’s apartment … 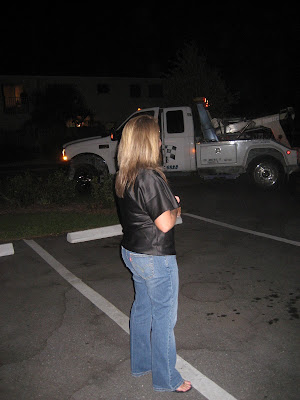 Around midnight, after PK’s car had been towed to her apartment and after we had returned to the impound lot for a third time to comb the dusty abyss for Joe’s cell phone, and after we had returned to St. Pete, ordered two large pizzas, nibbled on leftover ice cream cake and opened presents, I settled into bed, exhausted, content and three years away from 30.
You see, I’ve been a little stressed lately. I’m not exactly sure why. I seem to be working things out in my dreams though, because every day I wake up a little less wound. I wonder if it’s wedding stuff. Work stuff. Money stuff. The fact that I just paid the government $1,400 in taxes – half of my pathetic life savings. Or that I still can’t clear up the pug’s eczema, or stick to the novel I suck at writing or finish the novel by my bed I suck at reading.
One things for sure. My friends, my family and my fiance keep me grounded. Without them, I’d lose my head.
I tend to digest life better when I’m driving. I think it’s because it’s the only time I sit still and concentrate on getting from point A to point B. On my way home from the Tampa airport after I had dropped off Ro and Heelya at Southwest Airlines’ curbside check-in, I started sobbing so much my temples hurt.
When I got home, Joe walked with me to the bike shop to pick up my Bianchi and I cried some more. I told him my heart breaks every time I have to say goodbye, and he told me to keep my chin up and sang me a stupid pop song to make me laugh.
And it worked I suppose, because on the walk home I saddled up my Bianchi like Lance Armstrong and pedaled fiercely from point A to point B; Joe running like a bull behind me with my purse slung over his shoulder, trying to keep up, looking hysterical and lovely at the same time.
—
PS. Ro & Heelya – I miss you and love you. See you in June when we ride 62.5 miles in The Ride For Roswell.
PPS. To my succulent readers – I’m alive and well. Thank you all for checking in on me! I received e-mails, Facebook messages, TWITTER greetings, younameit, wondering where the hell I’d gone. Thanks to yesterday’s deep tissue massage, I’m back to my narcissistic self. I plan on catching up on all your blogs this weekend from my new Sky Chair.