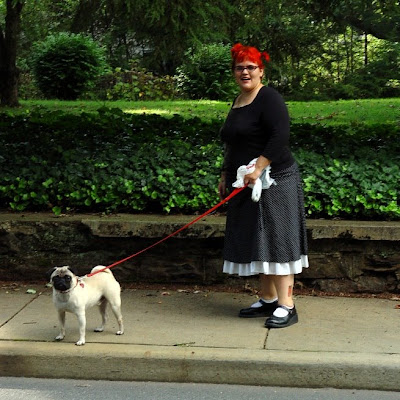 The hair! The pug! The ankle socks! The Mary Janes! I wish this chick lived in St. Pete so we could kick it over beer and peanuts. I wish I hadn’t just happened upon this picture while randomly searching for PUGS on Flickr.
Today I’m word-loose and Lancey-free, basking in the kind of deep relief that comes with turning in a story at 1 p.m.
When he’s in the middle of an assignment, Joe, my fiancé, who’s an associate editor here, likes to say: “The story’s done. I’ve just got to write it.”
On most days, that’s usually where my head is. Floating somewhere between Story’s Done and Just Got to Write It.
But not today! Today I turned in a big story – a cumbersome but interesting one – then I took the pug to Coffee Pot Park and I sat on a bench by the bay with my eyes closed for 20 minutes and daydreamed.
It was glorrrrious.
I called my Nana, and then my mother and I sat for awhile longer on the bench and listened to water lapping at the break-wall. The sloshing reminded me of my childhood spent on a sailboat in Lake Erie, so I closed my eyes again and willed memories into focus.
The pug, happy to be in the shade under the bench, was so quiet and grunt-less I forgot he was with me, so I let the leash go slack.
Then I walked back to my house off Coffee Pot Drive, scheduled a few interviews and retreated to the backyard, where I sat in my Sky Chair and contemplated something my mother had said:
One house down from the house I grew up in, lives a man named Norm who owns the grape fields stretching up and down Langford Road.
He’s about 90 years old, dour as hell and drives a rusted truck. When I was a kid he used to pull into our driveway and lay on the horn whenever he wanted to talk to my dad. According to my parents, he still does this today except lately his visits are fewer and far between.
My parents say it’s been years since the red-headed goose-haired farmer stopped in, so when his pick-up truck pulled into the driveway yesterday my mom kind of did a double-take and my dad kind of sat back and waited to hear a horn-honk.
When that didn’t happen, my dad went out to the truck to see what was up and a few minutes later walked back in the house with a bemused look on his face.
“Do we have any masking tape?” He asked my mom.
“MASKING TAPE?” My mom yelled from the kitchen.
“Yeah,” my dad said. “Norm needs a piece of masking tape.”
“MASKING TAPE? What?” My mom asked.
“I’ll tell you later,” he sighed. “Just rip him a piece.”
So my mom ripped my dad a piece of masking tape and my dad brought it out to Norm, who was waiting as usual in his jitney truck, and the two sat in the driveway for awhile catching up on stuff.
That night, my dad wondered out loud if maybe Norm just wanted someone to talk to. He apparently needed the masking tape to adhere his crumbling car inspection sticker to his windshield, but my dad has a hunch the old man’s just lonely. His wife died not long ago and since then, Norm’s been up to all sorts of nice things. For one: he reconciled with his estranged brother Carl, who lives one door down from him on Langford Road, and whom he hasn’t spoken to in 25 years.
Turns out Norm’s leaving the country for the first time this summer. His daughter is taking him on a Caribbean cruise.
Well, my dad said, wouldn’t ya know the old bugger doesn’t have a birth certificate! He’s come across nothing but trouble trying to get a passport for this cruise. He tried talking to the town clerk about it and she suggested he talk to someone in New York City.
The Office of Vital Records in New York told Norm they only deal with ancient birth certificate requests in person. So next thing Norm knows, he’s flying into LaGuardia to deal with the matter face-to-face.
When he got there, the agency suggested he find someone who was at least eight years old when he was born to prove he wasn’t trying to pull a fast one on the government.
“That’s gonna be tough,” Norm said. “Nobody that age is still alive.”
So the agency let it slide, using testimony from Carl, who’s three years older, to prove that yes, Norm was born in the United States and has lived in North Collins, N.Y. since the Paleozoic Era.
“All of this to go on a cruise?” I asked my mother.
“Hell,” she said. “It’ll probably be the first time Norm’s left the state!”
—
PS. Lance turned one year old on Friday. Happy belated, pal.
PPS. R.I.P. Dorothy Zbornak.
PPPS. Pug-walking photo by Zen. For his photostream, click here.