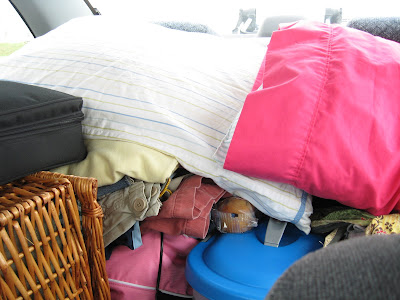 Part two of this adventure revolved around staying with friends and friends’ families.
For two weeks I traveled the Midwest, sometimes camping, sometimes staying with people I knew (or people of people I knew.) It turns out I know a lot of Midwesterners, and their company was a nice reprieve from solitude.
In Macomb, Illinois I stayed with my girl Ricci’s mom, Beth.  In Chicago I stayed with my old coworker Kevin. In Athens, Illinois (a charming little town outside of Springfield) I stayed with my old roommate Zac’s family. Zac, in case you didn’t read this post, is one of several reasons why I asked Joe out. He also threw me a sweet bon voyage dinner party the night before I left town, at which he cooked my favorite authors’ favorite foods. (Hemingway’s gazpacho was delish.) Zac’s marrying us in September. I’ve also convinced him to MC the event.
Without further ado, here’s part two of my road trip, in which accommodating Midwesterners welcome the pug and I with open arms, scrambled eggs and bags of radishes:
— 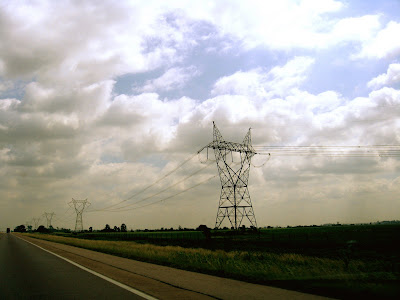 Osceola, Arkansas
Osceola, Arkansas is as flat as my palm. The roads run like wrinkles in the land. Dry, dusty wrinkles through fields of wildflowers. For every stop sign there is a Baptist church. For every billboard there is a cry in capital letters to choose Life. The country stations play old country. Dolly. Willy. Merle Haggard. In between songs a man reads the obituaries of local residents — the times and the places of memorial and burial services and what each person meant to their community. When I crossed the Missouri line I pulled off an exit for Sikeston to eat throwed rolls at Lamberts Cafe but the place had no outdoor seating, which is a problem since my dog cannot be left in the car for the duration of any sit-down meals, (thus my recent diet of cheese crackers from a Dollar General in Sevierville, Tenn.) So instead I pulled into a Piggly Wiggly to take a wee, was forced to use an old Post It note in my purse as toilet paper since the Piggly Wiggly’s employees only bathroom had none, bought the Southeast Missourian, forced my overheating pug to drink water and continued on my way to Macomb, Illinois.
I had no idea what to expect.

Let me put it this way. There is something magnificent to be said for each and every one of our friend’s hometowns. If you’ve ever traveled to or with a friend back to the place they came from then you know what I mean. Someone’s hometown– the place in which they became a person– is an extension of their body. It’s an organ really. It’s this living, ticking, blood-pumping organ. And whether or not they still live there, the town will always be an organ.

Your hometown’s tissues are your tissues. It’s comforting in that chicken noodle soup kind of way.

About Ricci’s I can say this: I drove straight from Mempis to Western Illinois. It took me six hours of I-55 driving and then two and half hours of US 67 driving. Taking an interstate clear across a state (much like I did in Tennessee) and taking a US highway are two totally different worlds. Whichever path you choose you will drum up two totally different feelings. Interstate driving is zone-out, steering wheel-drumming driving. Blinker left, blinker right.

Highway driving is rolling pastures, on-coming trucks, stop signs beside old gas stations with no names, baseball diamonds cut into cornfields, sweet potato fries and custard stands with bells on the doors so whenever you come or go you make an entrance or an exit.

My father would say it’s like flying in a Cessna instead of a 747.

By the time I got to Macomb I was totally embedded in Western Illinois. I called my Oma and told her I felt like the state was a quilt and up until this point I’d only traveled the surface from square to square. This time on US 67 I had burrowed into the cotton batting between the layers. I was a piece of lint. And I was beginning to feel a little … well, absolutely and disconcertingly … stuck.

The farmlands of Illinois look exactly like my hometown. If I were to fall asleep on the side of the road in Industry, Illinois and woke up the next day unaware of my travels, I’d think I was in North Collins, NY. When this became amazingly clear to me I started to freak the hell out.

It took me hours to reach Macomb. I was back and forth with Ricci’s mom every thirty minutes. “I’m driving through the town of blah-blah-blah. Am I close yet?”

When I finally reached Macomb I was exhausted. Cubbie was antsy. I was starving. The only nourishment I’d had that day was an enormous cup of coffee that waged inside my stomach a small and unsuccessful war.

Ricci’s mom, Beth told me to meet her at a friend’s place on Pennyoaks Drive. She was helping some friends load a U-Haul truck. The friends were moving to St. Louis. There would be a potluck dinner and Ricci’s high school friends’ parents would be there. It was 7 pm by the time I rolled up the Bitner’s drive. I opened the car door, a chewed-up apple rolled out of my car. The pug bounded from the passenger seat. I took a swig of water, smoothed by khaki shorts and walked up the driveway to a procession of Midwestern moms and dads loading a U-Haul truck in a u-shaped driveway. It was Midwestern hospitality at its best.

I was promptly offered water and homemade garlic cheese bread. I said yes to both. I was as curious of them as they were of me. Ricci’s mother along with some of Ricci’s highschool friends’ parents decided to form a club after their kids took off for college. They still meet at least once a month. I happened to roll into town on such a day. There is no better way to roll into town.

Beth took me out for icecream at DQ to which Ricci later told me on the phone, “that’s the old hangout dude. Like every one of my friends worked there growing up.”

It’s true. Now that Ricci’s friends are gone the place is staffed by most of Beth’s high school students (she’s a math teacher at Macomb High.) I ordered a vanilla cone. Beth got a dilly bar. Cubbie begged for both.

When we got home Cubbie and I crashed on Ricci’s old bed.

“That’s so weird- you on my bed back home,” Ricci said from Sarasota.

“I know! There are alot of posters of cute guys on the wall. Did your sister take this over when you left for college?”

Her mother piped up in the background. “She wasn’t happy about it.”

Beth scrambled me eggs in the morning (in the microwave because the oven broke recently) and sent me off with a baggie of radishes and nectarines.

She pondered it for a second.

“I’ll lead you,” she said. “I’m headed to Hannibal today. Follow me to the highway. Head north for Chicago.” She looked over at the baggie of radishes in my hand. “You’ll like those. They’re fresh from the garden.”

She stepped into her car and I stepped into mine. I strapped Cubbie into the passenger seat. We turned off Debbie Lane and headed out of town. Moments later we pulled up to an intersection. I looked over at Beth one car over. She pointed her finger north. I rolled down the dog’s window.

“Thank you!” I yelled out into traffic.

“We forgot to get coffee,” she yelled back.

Cubbie snorted twice. I turned onto the highway. Tim McGraw was on the radio. Nectarines were in my cup holder as I burrowed north out of the quilt batting and back onto the periphery of the squares.

Chicago
I had no expectations for Chicago. Really.

I figured I’d get lost driving in. I figured Kevin would have a small apartment and that I’d be, at some point, coerced into eating a hotdog. I was right about the hotdog and the small apartment. But on the getting lost part… hot damn, I found my way so easily I figured I must have driven into the wrong city. (I was once lost in a mall parking lot in Sarasota, so I’d say my reaching Illinois is damn impressive … not to mention my driving up Michigan Avenue at rush hour to pick Kevin up at work.)

My dad called earlier.
“Where you headed today?”
“I’m driving into Chicago as we speak.”
“Well. That’s a helluva city to go to.”
“I know.”
“Whatcha doin in Chicago?”
“I’m picking Kevin up from work.”

He was right — Chicago is a helluva city and KJA was a helluva tour guide. Apparently I choose the perfect weekend to visit. Street festivals. Art fairs. Book fairs. Tribute bands. Amazingly, beautiful, fantastic weather. I could go on. Instead I’ll do this.

In my three days of Chicago sightseeing I participated/witnessed the following things:

Athens, Illinois
I’m at my roommate Zac’s family’s house.
What is it about the Midwest?
When I rolled up to Zac’s place in Athens, Il (pronounced A-THINS) Zac’s adorable and super sweet mother was hosting a Gone With The Wind party for her Relay-For-Life team. The chocolate chip cookies in the midwest are by far the best chocolate chip cookies this cookie monster has ever had. (And I’ve had plenty. I once ate an entire jar of cookies back home. I sat on top of my kitchen counter crying to my mother about why I hated my job bussing tables at TGI Fridays.)
Zac- much thanks to your mom and Tina who contended with a four-dog-one-cat brawl in their backyard. My apologies go out on behalf of Cubbie who pissed on the side of the downstairs sofa. A little shout-out to Rachel (Zac’s 17-year-old sister) and Marian (Rachel’s friend who spends her summers working as a Civil War era reenactor in nearby Springfield) for taking me to see Miss Saigon at an outdoor opera. I forget what it’s like to ride with two funny teenagers in a family-sized sedan giggling about nasty gym teachers and how flippin’ cute Orlando Bloom is.
—
PS. The first photo is of the back seat of my car. (Note the picnic basket and gas station blueberry muffin.) The second photo is the pug’s view from the passenger seat window as we passed through hauntingly beautiful Arkansas.