(I started writing this Tuesday – and then Henry woke from a nap.)

Sometimes the exhausting ones cloud the beautiful ones. Such is the way of life I suppose.

So right now, at 4:45 in the afternoon, when I’ve got work piled high on my plate, when Henry is down for an afternoon nap, when I should do be doing something more productive with my time…

When I should be doing that and then some, I’m doing this instead:

Tipping my hat to Henry, to the baby who is well on his way to six months old, who is already so strong and bursting with personality.

When he falls asleep in my arms I count the tiny blue veins in his eyelids. They’re subtle, but when you notice them, they look like fireworks petering out in the night sky.

In these quiet moments, I try to picture the man he’s going to grow up to be.

And then I get hung up on the “man” part.

I’ve been told it happens fast.

So for all the moments when I could or should be doing something else, I’m going to do my best to do this instead:

be calm, be happy, be grateful, be easy.

END_OF_DOCUMENT_TOKEN_TO_BE_REPLACED

If you look closely at the wings, you’ll see words I cut from the original French version of my favorite enlightened kid’s book, The Little Prince (Le Petit Prince).

My painting class wrapped this week. I’m happy to report the session ended much better than how it started. The teacher brought in brownies and wine to mark the occasion, but I was so focused on my owls I indulged in neither.

PS. Congratulations to my fellow due-dater, Nicole, who had her baby girl, Lily, Sunday night!

And here are the owls in their cave.

(Note: my dad is installing chair rail where the white stripe is.)

I’ve received a few requests to post the stupid owl painting referenced in Preggo Confession No. 6.

Here it is in all its putrid glory.

I painted it on a sheet of watercolor paper. It was a trial run. As a result, I’ve decided to NOT paint owls for The Baby Cave.

I’ve got a few other ideas, but I’m open to suggestions. My next class is TOMORROW.

(Note: suggestions must be elementary and cartoonish. As you can see, I suck.)

END_OF_DOCUMENT_TOKEN_TO_BE_REPLACED

Too distracted with The Baby Cave to write. I’m incapable of writing about every bitty detail of my September 12 wedding. I do however love pictures and I wanted you guys to know that despite my bridal aloofness, I did not boycott all frivolities. I embraced many of them with an open and girlie heart. I love throwing a party!

So for those of you who have asked me to share wedding details and the wedding bridal veil, here’s a picture play-by-play.

(FYI: I’m not wearing this lovely Sarah Seven dress, but I do think her designs are wonderful. Visit Sarah’s website. She lives in Portland, Ore., where I imagine her life is endlessly hip.) Today I was inspired to add blue to my wedding. (See above collage by Blissful Mama.) It wasn’t until I walked past my bathroom and saw Joe’s orange towel draped over the shower curtain that I realized why my brain has been swimming with turquoise, brown and orange. I see it as a homage to Florida and New York, though I haven’t settled on it yet. Who knows, by tomorrow I might think it’s awful. My mother thinks I’m nuts, but you can see now where the color combo came from.

I’m in the middle of making personalized birds nests. While these will function as placeholders and favors, they are not the only wedding favor. Joe blew my cover on the nests last week when he announced on his Facebook status that he was, “sitting on the couch working when the UPS man arrived with a box of 120 bird’s nests. You never know what the day will bring.”

END_OF_DOCUMENT_TOKEN_TO_BE_REPLACED 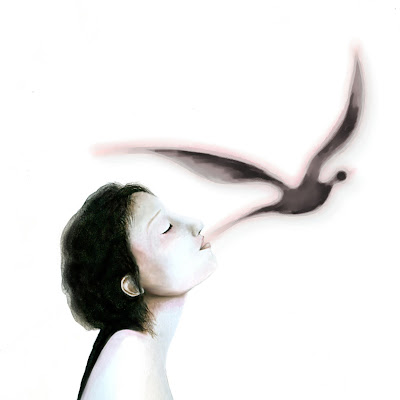 The coffin was smooth, buttery and brown. When Edie touched it earlier in the parlor, she made a mental note to remember the way the wood felt on her palm, how well it had been sanded. She wondered if it had been sanded by hand or produced in some factory. When I get home, she thought, I’ll look it up on the Internet. Coffin production.

And if in fact, her research should suggest that most coffins are produced by factory workers overseas, Edie would insist that night, while lying next to her husband in bed, that if she died before he died, that she should be buried in a hand-sanded coffin.

Likely, he would say, “Edie, baby. Why are you so morose?”

And likely, she would reply, “I don’t want you to have to worry about picking one out.”

And likely, he would say, “That would be the least of my worries.”

And likely, she’d respond, “But if you’re standing in the coffin aisle at Home Depot and you have a choice between a coffin made on some assembly line or a coffin painstakingly sanded by a man for days–“

He would interrupt, “You want the one sanded for days?”

And she would reply, “Yes.”

No one had recognized her. Not under the umbrella-shaped black hat she bought at a Goodwill store. Not with the black veil shrouding her big, wide unmistakable Edie eyes. Not with the way she slid into the parlor as if to leave no footprint, as if she were just air and space seeping between shoulder blades, rising up among knobby knees in a cold funeral parlor that smelled like a cheap air freshener and damp clothes. Not with the way she pursed her lips and never opened them, not even to breathe the word hello, how are you, or sorry for your loss.

It had been the three little white girls at her side that gave her away. Timid and clinging to their mother’s stockings, they were the only little white girls in a sea of black faces, and Edie knew that if she brought them, that no amount of black netting, nor big-brimmed hat would take away from the fact that she was Edith Armor.

Standing under an oak tree, at the top of a wet hill, she hoisted her youngest daughter onto her hip, pushed the child’s dark hair away from her eyes and kissed the brown birthmark that was shaped like a bird. Her two youngest daughters, blonde twins in black tap shoes, grabbed each others hands and stared at their feet.

It was the first time Edie had been to a funeral in the rain, and other than that one extraordinary detail, there was nothing else extraordinary about the day.

PS. Illustration is Reincarnation by Hisss.