My neighbor’s urban chickens are always running their beaks. After two years I finally got an omelet to show for it.

Last week, a 12-year-old boy knocked on my door holding a small container of brown eggs.

“They were laid today,” he said, handing over the loot, still speckled with black feathers and bird crap.

He scurried away before I could ask him if his goose lays any golden eggs.

END_OF_DOCUMENT_TOKEN_TO_BE_REPLACED 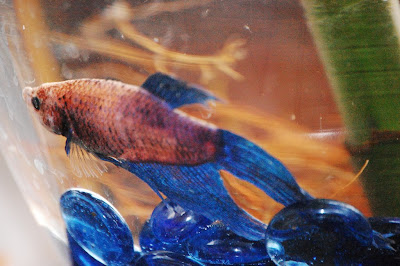 I have a tendency to write in either clipped sentences that make my Aunt Debbie laugh, or long tangled ones that stretch and pull like heavy muscles after a long bike ride.

Sometimes I can’t write at all. Sometimes I can’t stop. It’s what some therapists call an addiction and other therapists call an outlet. To me they’re one in the same – addictions and outlets – marked by bouts of happiness and bouts of sadness. Marked by what we mull over on long drives home as the evening sun blinds us, making us squint, making us look in the rearview mirror to check our makeup or to check our teeth, where upon doing so we discover that years of squinting has etched lines on our face, which is why I suppose the passage of time is often illustrated by lines.

I know she was just a fish, so I’ll just make this clear: it’s not about the fish. It’s about what we get attached to. And how we get attached. Attached to people, to TV shows, to bands, to cars, to brand names, to favorite pubs and football teams. And it’s not just humans either. My dog is so attached to me that when I don’t come home after work Joe tells me he sits with his nose to the front door and waits.

Some people cynically spin the word attachment and call it baggage. If you’ve met someone who brags that they have no baggage, don’t buy it. No baggage means no attachments and the minute you hear that B.S., be wary. A person with no baggage is either deeply repressed, deeply afraid or deeply alone.

In 2002, when my favorite show Ally McBeal went off the air I remember retreating to my bedroom and crying softly into my pillow. On the surface it was a pitiful act. I remember my father snorting under his breath as I whimpered during the final David E. Kelley credit.

And I remember my friends stopping by the house to cheer me up – half joking, half not – because they understood that even if I was a fool to mourn the skinny broad I had, from age 15 to 20, identified more with that neurotic, hallucinating, love struck lawyer than any other female character then or since.

Attachments vary of course in seriousness. I was also, for about ten years, attached to a Paula Abdul concert tee shirt my mother found at a Goodwill store in Hamburg, N.Y. Even though I had never seen Paula in concert – and I promise you I begged – I became unreasonably attached to this tee shirt.

I’d wear the shirt to school, to bed, to the airfield where my father flew his model airplane, to my Oma & Opa’s house for dinner. I wore it so much I convinced myself (and others) that I had actually gone to the concert. I held onto it for years. And when I finally threw it out sometime in 2005, a pang of wistfulness stabbed at my memory and I’m sure in my montage of memories I thought: what a great concert.

My office fish Martha died last week. She was 11 months old. Her bowl was cloudy and she was acting listless the day before, which gave me pause because Martha was usually a plucky fish. Just last week I gushed to my coworker Kyle, “Man, she’s a cute fish, isn’t she?” To which one of our editors replied, “Can fish be cute?”

It was in the way she swam – dive bombing the bottom of her bowl and then rushing to the surface to eat pellets and blow bubbles, staring at me with one distrustful eye and out the office window with one trustful eye – that reminded me of Holly Golightly in Breakfast at Tiffanys. She was a pale fish. Colorless really, which is why I chose her. All the other Betas in the pet store were red, purple, orange and blue. Ostentatious fish with gaudy dramatic fins.

Martha was understated. Sleek, simple, yet an extrovert.

I realize now that I probably overfed her. According to every Beta web site I tracked down, cloudy bowls are an indication of overfeeding. (Kyle you’re off the hook. Perhaps by keeping her lean while I was on vacation you extended her life span by two weeks.)

So the next morning I spread myself out on the balcony with my computer, a cup of coffee and Patty Griffin on repeat. Noticing that a U-Haul was running at the apartment next door I did what I do best, and spied at the two women below as they stood hugging, saying goodbye and promising to keep in touch. I recognized the mover as a woman I named Plant Lady after the litter of busted ceramic pots and Little Shop of Horrors ferns she keeps by her door.
If there’s one thing I’ve learned from living at five different addresses in four years it’s that apartments are ghostly things. Unlike houses, apartments take shape after a person moves in. A shithole can look like a two-page spread in Better Homes & Gardens if someone with a decent sense of feng shui and fine art occupies it, and though I rarely get attached to my neighbors, I do in a sense get attached to their presence … and their stuff.
Once when I lived with my friend Zac in a second-story apartment in downtown Sarasota, I got attached to the habits of the couple two doors down. I grew accustomed to the sound of their baby crying, their deafening television set and their evening cigarettes, even though we didn’t talk, save for the occasional “hello,” “goodnight,” and “how’s the baby?”
Zac and I nicknamed them Man, Woman and Baby. And just knowing they were there was a comfort. Occasionally Man would mention his being a pastry chef on Longboat Key and according to Zac, he would sometimes bring leftover tarts to our door, the likes of which I never saw much less ate.
One weekend Man, Woman and Baby moved away. I never said goodbye. Never even saw the U-Haul. And still I missed them. Especially their pastries.

I read a NY Times essay this week in which an Iraq war vet – now safely stationed in Brooklyn and “non-deployable” after getting shot in Baghdad – mourns the loss of his overseas daydreams, most of which centered around Natalie Portman:

“… She and I would have dinner in a darkened restaurant, somewhere hip and stratospherically expensive, thick with the smell of polished wood. The swirling flashbulb-pop taste of something unpronounceable on my tongue; looking up, smiling and feeling the shivering joy of having her laugh at a witticism of mine.”

Attachments. All of it. Material. Ephemeral. The things we sometimes take for granted. The things we don’t. I’m sitting here watching Plant Lady pull away thinking straight lines are pinched by the passage of time and even though we never met, I’m going to miss her man-eating ferns.