PS. And yes, The Joe Spa is staffed by my husband. (See the prenatal massage punch card he made me for Christmas.) Without the pregnancy pillow, lying-down back massages would be impossible. We shape the pillow into a circle that way I can lie on my stomach without actually lying on my stomach. We copied the idea from Hand & Stone Massage. I had a membership there until my husband gave me a homemade punch card, thus rendering the company’s membership fee ridiculous. Remember last year’s Bardi Bonds? Yeah, my babydaddy is awesome. I wrote this the day I returned from my honeymoon and never posted it. It’s for you romantics.

It was important to Joe that we go on our honeymoon the day after our wedding. One momentous thing followed by another momentous thing. Wedding then honeymoon. No lag time between. He called it “getting shot out of a cannon.” There would be immense build up, followed by drunken well wishes and champagne toasts, culminating in a spark that when lit would launch us into the autumn horizon like a rocket, propelled by a combustible mixture of red wine and roses that no amount of romantic lollygagging through Upstate New York could or would encumber.

So here I am at 3 p.m. on September 25. Back in Florida. Back on my couch with the pug by my side and Joe asleep in the bedroom after insisting he cover most of the 23-hour drive from Buffalo to St. Petersburg himself.

We had built fires in the woods near Montréal, Québec, ferried our car from Plattsburgh, N.Y. to Burlington, V.T., purchased armfuls of produce on the side of the road and then washed it all down with champagne beside a waterfall. When Joe suggested we drive straight through the night, I didn’t protest. What was one more adventure in the month of September? We were in such a bliss bubble on our drive home that even a blown tire in West Virginia seemed cute. Well, to me anyway.

All the clichés about time and how fast it goes are true. I didn’t fully grasp that until now. Sometimes when you step outside of your body and take a second to swallow a moment, you can see the slow-motion passage of time. One fat molecule freeing itself from another fat molecule like liquid taffy. Gelatinous time.

About two months ago, Joe turned to me and asked, “You wont get depressed when the wedding’s over, right?”

“Depressed? No. I’m looking forward to getting my life back.”

I was up to my waist in wedding planning and work. Luggage-sized bags had formed under my eyes and inside these hollow caves I carried a never-ending to-do list of tasks.

Three months have passed since that conversation and now I’m doing laundry and unpacking suitcases, giggling to myself as I separate the various memories from the last three weeks into a cardboard box that I will save forever. Wistful already.

Despite getting only two hours of sleep last night, the bags under my eyes are gone and in their place is something new. I can’t really describe it because part of me thinks it’s purely psychological, although Joe, in his usual Joe-way, tried to describe it three nights ago in Cooperstown, N.Y.

“You look wife-like,” he said.

“I don’t know. Because wife-like sounds so matronly.”

“Well, if matronly is beautiful. You look matronly.”

I think it was then that I blushed, and when I blushed the space under my eyes filled with something warm and dewy. I noticed it this morning when I walked into the bathroom and saw that he had unpacked all the hotel toiletries we collected on our honeymoon and arranged them on the vanity as if we were still on vacation. 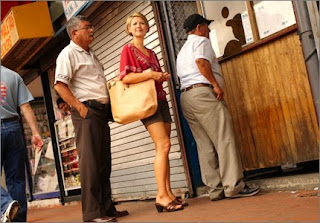 If I could be anything other than a reporter this is what I would be:
+ a concert pianist
+ a race car driver
+ a stunt double
+ a novelist
+ a veterinarian in a small town in Upstate NY
+ a rafting guide on the Tugaloo River in South Carolina
+ the owner of a fruit market and ice cream shop called Sergeant Pepper’s Lonely Hearts Stand, preferably somewhere in Tennessee.
+ Samantha Brown on the Travel Channel (see photo)
+ the voice of a cartoon character
+ a contestant on a reality show, preferably Survivor, The Amazing Race or Survivorman.
+ a crane operator
+ a writer on The Colbert Report
+ a Mark Twain impersonator. Mike Randall, a Channel 7 weatherman in Buffalo, is the best one around.
+ a writer for The Onion.
+ a panda midwife.
+ the network executive who cancels the Tila Tequila show.
… I’ll add more, believe me.
Today is “Girls Day Out” with Leilani so I can’t spend the morning futzing around with a post. I need to throw together a bag of used clothes for this thrift store swap thing we’re doing, followed by froufrou drinks and Sex & The City: The Movie . Woooah Nelly. I’m riding the Estrogen today like a rodeo cowboy!