(I started writing this Tuesday – and then Henry woke from a nap.)

Sometimes the exhausting ones cloud the beautiful ones. Such is the way of life I suppose.

So right now, at 4:45 in the afternoon, when I’ve got work piled high on my plate, when Henry is down for an afternoon nap, when I should do be doing something more productive with my time…

When I should be doing that and then some, I’m doing this instead:

Tipping my hat to Henry, to the baby who is well on his way to six months old, who is already so strong and bursting with personality.

When he falls asleep in my arms I count the tiny blue veins in his eyelids. They’re subtle, but when you notice them, they look like fireworks petering out in the night sky.

In these quiet moments, I try to picture the man he’s going to grow up to be.

And then I get hung up on the “man” part.

I’ve been told it happens fast.

So for all the moments when I could or should be doing something else, I’m going to do my best to do this instead:

be calm, be happy, be grateful, be easy.

END_OF_DOCUMENT_TOKEN_TO_BE_REPLACED

This is a true story. And the only reason you’re reading about it is because it’s been resolved.

Let me start it by saying Joe is sitting in front of our new 55-inch Samsung flat screen television watching last night’s episode of Lost. The look of contentment on his face is something neither I, nor any other human, is capable of evoking. It is a Cheshire cat grin basked in the glow of a very expensive machine mounted four feet off the ground. It is the look of sweet relief usually seen on the faces of mothers, who after hours of labor, reach out to cradle their newborn babies. For Joe it is a state of solace only fiber optic cables transmitting a HD signal could offer.

It is the Wonka Bar to his Augustus Gloop. The crack cocaine to his Whitney Houston.

It is a whale of a TV, so sharp and un-pixalated that my brain can barely discern what’s happening for real in my living room, from what’s happening inside the LCD panel hanging on my wall. Of course it does nothing for me. Of course I balked at the purchase. Of course I wanted a kayak instead. At $1,600, I whined that we could get two kayaks for the price of one TV. But since my husband has agonized over this purchase since the day we met, I knew it was only a matter of time before we drilled a dozen holes in our wall and attempted to heft a 70-lb. television onto a metal bracket, oblivious as to whether or not we hit studs.

END_OF_DOCUMENT_TOKEN_TO_BE_REPLACED

It’s 35 degrees out and eerily beautiful in St. Petersburg, Fla. I walked the pug twice today, exhaling hot breaths slowly and deliberately, staring at the way it hung in front of my nose and floated away. A ghostly cloud of carbon dioxide. It was as if I’d never seen my breath before.

I wore long johns today under a pair of running shorts. I wore a scarf all day inside the house and an Oliver Twist hat to the grocery store. Joe’s cheeks were rosy after our afternoon bike ride and my morning coffee burned going down like whiskey or an iodine injection before a CAT scan.

The bay was calm, flat and gray and people buried themselves under layers of sweatshirts and scarves, tossing tennis balls to their dogs in the park, jogging in place to stay warm. My ears turned red and hard when we were pedaling, but when I tried to pull my hood up under my bike helmet, the helmet wouldn’t fit, so I pedaled through the prickliness.

It was gloriously cold out, but if you’d have met me when I was 20, I promise you I would have cursed the weather with a furious fist. Western New Yorkers may be a hardy bunch, but we’re nothing if not expertly dissatisfied with the weather 300 days of the year. The weather, among other things, is what makes us exotic. How creatures can live comfortably in sub-zero climates blows peoples’ minds. What kind of creatures would choose to live this way with such utopian options south of the Mason-Dixon Line?

Of course now I miss the tundra (in small doses anyway) and as I lie here in bed listening to a Florida news station blow a perfectly chilly 40-degree day out of proportion, I can’t help but summon my inner grizzly bear.

“Cover your plants, folks. Remember to bring your pets inside. Farmers are working overnight to save their crops from the cold. Don’t forget to turn the heat on in your car before your morning commute. Some bay area students will have to dress extra warm tomorrow. How one Largo middle school is coping without heat. Next: more tips on how to stay warm in an arctic freeze.”

One Tampa news station posted these actual tips: Wear multiple layers of loose-fitting, warm clothing. Do not use charcoal or other fuel-burning devices indoors, such as grills that produce carbon monoxide. Stay dry and in wind-protected areas.

PUT ON A PAIR OF FUZZY SOCKS AND GET OVER IT. For criminy’s sake, it was so insanely hot in October the only pumpkin I was ever proud of rotted two weeks before Halloween. 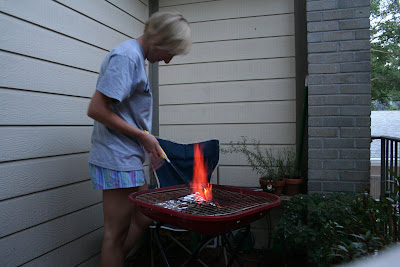 If you had lived in a synthetic bubble all your life, and one night were freed at about 8 p.m. on 8th Ave North in St. Pete (where I live) and heard what I hear now, you might think the world had ended or that aliens had finally arrived.

The cicada bugs sound like a dying game show buzzer.

If I were allowed to open the windows in my apartment I might hear them more often, but instead I’m forced to take in their grating mating call from my balcony, which is why it’s so important Joe and I find a house with a porch. (For more on our house hunting shenanigans click here.)

Cicadas are the one rural thing this city has going for it – another reason why I love them.

I’m sitting on my balcony with two citronella candles at my feet and a fire on the grill. The sun is slipping behind Kim and Russell’s gargantuan house and Cubbie is roaming the yard below. Joe is watching Countdown with Keith Olbermann, slamming together patties of ground chuck and my sister PK finally, doggedly got a job. It is a typical Monday night and I’m in a fantastic mood.

I have about two hours of tape to transcribe from an interview I had Friday with a state representative. That much I’m dreading.

But before I go, I think it might be fun to point out that last week I interviewed two state representatives in Sarasota, both republicans. The first one said he didn’t buy global warming and that plenty of people feel the same way.

“Ambulences aren’t all of a sudden going to run on hydrogen,” he said. “They’re not going to run on nuclear. The technology isn’t there. At the end of the day when somebody wants to go to the hospital they want 300 horsepower under the hood. Not three horses … This is a capitalist country. We would have figured something out by now. Some entreprenuer would have figured out a cheaper way of producing energy and made himself a gazillion dollars. It’s economics.”

So I fired back something like this (minus the Toby Keith reference at the end):

“Don’t you think we’re seeing that now? Four-dollar-a-gallon gasoline is a big motivator. We’re beginning to realize it’s not the cheapest, most efficient way to power our cars so entrepreneurs are starting to perk up. (Hello T. Boone Pickens.) The market is ripe with money-making potential. It’s like when the Wright brothers first started experimenting with flight. Believe me there’s money to be made. Dependency on foreign-made goods ain’t what Toby Keith sings about.”

And then, after chalking up global warming to sunspots and volcanic activity, this same legislator said he supported state-funded research on alternative energy. What we should be doing, he said, is using service tax revenue generated by offshore drilling to support university research on tidal energy.

I couldn’t believe it. Towing the party line is one thing. Tripping over it is another. And tidal energy, eh? Surely he got the e-newsletter from treehugger.com.

Ugh. I’m headed to the couch. Dinner is through and it’s ice cream hour now. The cicadas have hushed and the mosquitoes are out. I’m off to itch my bug bites with credit cards and transcribe interview tape.
Goodnight nation.