Because I modeled in my first fashion show Sunday night.

A woman I interviewed this summer asked me to participate. (Note: this was before I got pregnant.) The forces behind the show apparently didn’t mind that I was pregnant, so I went ahead and strutted my stuff baby bump and all.

The experience brought back a similarly glamorous memory. Ladies from my generation: surely you remember the disturbing popularity of Glamour Shots.

I blame my mother for this frightening photo. She coerced me into posing for it after she got her hands on a free coupon. Of course.

I was in sixth grade. SIXTH GRADE. I look like an 11-year-old wife of a politician. You should see what the back of my hair looks like. The “stylist” was only concerned with POOFING the front. My mother calls it the “Barbara Bush picture” namely because I’m bedecked in pearls.

I secretly think she subjected me to this hideousness so she could laugh her ass off.

It goes without saying, the picture lives in infamy among close friends and family. Inspired by this weekend’s fashion show, I decided to scan and dissect it for your viewing pleasure.

PS. Happy Birthday to my best friend Ro! No one loves to giggle like you do. Here’s a post to start your day on the right cackle.

Oh, I tried. I really, REALLY tried to grow out my hair.

I even announced it, I was so dedicated to growing it out.

“I’m GROWING OUT MY HAIR. Just you see. I’ll be wearing ponytails by the end of the summer. I’ll be Rapunzel.”

I’ve Lanced about this topic before, in particular my obsession with Sienna Miller’s blonde crop circa 2005.  For years I walked into hair salons with a photo of Sienna. It got so bad I caught my stylist rolling her eyes.

This is not to say that I find long hair boring. I find it boring on me and I have no patience for the tedious growing-out process. To those of you with luscious locks, I hold you all in high regard. I admire your ‘do’s the same way I admire people who can sing. I can’t sing and I can’t rock heavenly tresses. I’m fine with that. I look like an Afghan hound with long hair.

The closest thing I got to a ponytail required three bobby pins and a minuscule rubberband typically reserved for braces. I looked like I had a kid’s paintbrush poking out of the back of my head. It was pitiful.

So I asked my stylist to give me something blunt and bang-y. Those who know me know this a slippery slope. I’ll probably have a crew cut by October.

PS. I realize I didn’t get very far, that my hair is still short in this second photo. Nonetheless, every time I looked in the mirror I saw a Hanson brother. Well, back when the Hansons looked like sheep dogs…

PPS. Congratulations to my cousins Erik and Reb on the birth of their first son, Brendan. You must see his birthday cake!

END_OF_DOCUMENT_TOKEN_TO_BE_REPLACED

The alternate title for this post is the early bird finds the evidence. And it begins like this:

I’ve been trying FOR A MONTH to run in the morning. Every morning I set my alarm for 7 a.m. and every morning I hit snooze for an hour. When I walk the pug in my pajamas, I stare with contempt at the svelte joggers who zip past in a blur of Spandex. Damn perfect in their Under Armour and Nikes, damn focused, listening to their iPods, pounding the pavement in the early morning fog.

I’m so desperate to develop a morning run habit that I’ve asked Ro to text message me at 7:30 for motivation.

Well, Wednesday morning I did it all on my own and because I was so proud of this feat, I ate two chocolate truffles for lunch.

I started the jog at a good clip. Rounded the block near the park by my house. Ran full throttle up Coffee Pot Boulevard –– full throttle because how could I not run full throttle up a street named Coffee Pot Boulevard? At a half-a-mile in my legs turned to Jell-O and my heart turned to applesauce. I actually hate running. While I’m fast and for five years played forward on my high school soccer team, I have knock-knees and flailing arms. When I run I look like Olive Oyl. I look like a blonde Olive Oyl.

END_OF_DOCUMENT_TOKEN_TO_BE_REPLACED 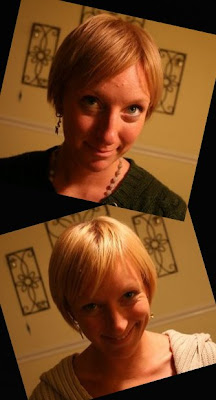 Can you tell which is which?
I’m posting these pictures for two reasons:
1. I’m no princess about my hair, but I’m very particular about its shortness. The second it grows out, I run to chop it off. Because of this urge I’ve had the same hairstyle for 10 years.
2. I got an e-mail recently from one of my editors asking where I get my hair cut. I responded with, “funny you should ask …” followed by a brief explanation of how a girl goes from cutting her own hair with the kitchen scissors to forking over $50 for a more professional job.
From that e-mail:
When Joe and I first met I was cutting my hair with the kitchen scissors. On especially indulgent days, I’d fork over $12 at Super Cuts and call it a day. I remember he URGED me to make an appointment with J.Con (a fancy St. Pete hair salon.) I remember he told me it would, “change my life.” It was as if I had been cutting my hair with a Flowbee. Eventually he bought me a gift certificate for Christmas, and for a year two years thereafter I only got my hair cut at J.Con – and I only made appointments with Cara, the chick who cuts his hair.
J.Con is hip, modern and smells like Aveda hair products, which is what I imagine Jennifer Aniston smells like on windy days.
J.Con stylists are hot. Seriously, seriously hot. They dress in only black and white and at first glance resemble Victoria’s Secret model Ana Beatriz Barros. Cara, my old stylist, is no exception. She looks like a brunette Julianne Hough from Dancing with the Stars.
Usually I bring in a picture of Sienna Miller. Something like this. 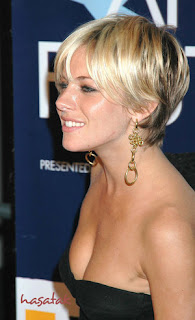 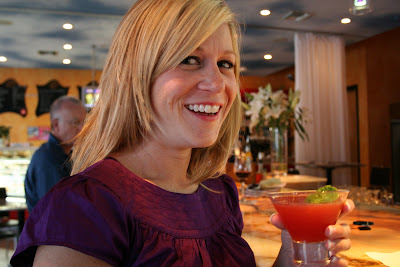